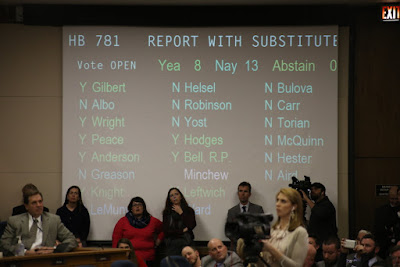 As previously noted, all but two of the LGBT targeted bills - all the pro-gay bills and all the other anti-gay  bills - were effectively killed last week by a House of Delegates committee that tabled the bills for "further consideration."  Today, one of the surviving anti-gay bills - a bill targeting transgender individuals that has garnered negative media coverage for Virginia across the globe - was itself killed in a House of Delegates committee.   GayRVA looks at this welcomed development.  Here are brief highlights:

A bill which would have forced transgender Virginia students and citizens to used the restrooms aligned with their birth gender in all public buildings was killed in a House committee meeting today.
HB 781 aimed to require the Director of the Department of General Services and all state school boards to implement policies for every “public building on property that is owned, leased, or controlled by the Commonwealth and every public school restroom, locker room, and shower room that is designated for use by a specific gender” to be used solely by those whose “anatomical sex matches such gender designation.”
If anyone, including students, violates this policy, they would have been charged a $50 civil penalty, though that part was later amended to remove students from paying the fee.

It goes without saying that the hate merchants at The Family Foundation, Virginia's leading hate group supported the discriminatory and animus motivated bill:

“Every student in Virginia has a fundamental right to body privacy, opening restrooms to members of the opposite sex would directly violates students’ constitutional right to privacy,” said Chris Fruend, spokesman for the conservative Richmond group The Family Foundation. He pointed to Federal Courts, like the one in Norfolk, who struck down part of transgender student Gavin Grimm’s complaint against his school board which passed a policy forcing him into a women’s restroom or a gender neutral bathroom.

“We can teach our children to be compassionate to each other without forcing young school-aged children into vulnerable interactions with the opposite sex in restrooms and locker rooms,” Fruend said, calling the bill common sense.

Fruend and his foul mistress, Victoria Cobb, cannot stand religious freedom for anyone but themselves and their fellow Christofascists.

Posted by Michael-in-Norfolk at Tuesday, February 09, 2016