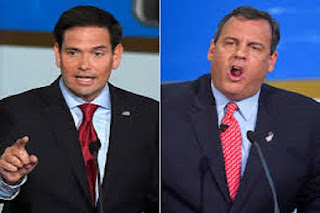 I will confess that I did not watch the Republican debate last night.  Instead the husband and I co-hosted a Mardi Gras themed party at our home as a post-wedding couple that were adore.  Suffice it to say that I feel as wrung out as I used to feel after Mardi Gras festivities in Mobile, Alabama - the home of America's first and longest running Mardi Gras celebration - years ago.  By all accounts, I missed an epic take down of Marco Rubio by Chris Christie.  I view Rubio in someways as dangerous as Ted Cruz when it comes to his extremism and frightening references to religion.  There is a great run down of the Rubio/Christie exchange at Slate.  Here are some highlights:


Sen. Marco Rubio is a gifted politician and talented communicator. But he’s faced a repeated attack in his six years on the national stage—that his smooth charisma conceals a man of little substance. That, on a fundamental level, he’s not ready for the Oval Office. And on Saturday night, Rubio gave substance to the charge in a remarkable exchange with New Jersey Gov. Chris Christie at the eighth Republican presidential debate.

It began with a question. The moderators asked Rubio to list accomplishments in his record that have prepared him for the presidency. Rubio cited work on foreign policy and issues such as veterans affairs before moving to well-worn rhetoric meant to counter these experience questions by tweaking a popular conservative notion about Barack Obama. “Let’s dispel once and for all with this fiction that Barack Obama doesn’t know what he’s doing,” he said. “He knows exactly what he’s doing.
Barack Obama is undertaking a systematic effort to change this country, to make America more like the rest of the world.”

And in this implicit analogy, Rubio is the Republican Barack Obama who will make a “systematic effort” to make America unique again. “When I’m president of the United States,” he continued, “we are going to re-embrace all the things that made America the greatest nation in the world, and we are going to leave our children with what they deserve: the single greatest nation in the history of the world.”

It’s a good line, designed for applause. But this time, Rubio had pushback, in the form of Christie.


Behind in national polls and struggling for air in a crowded field, Christie has focused on his experience—as an executive—to make the case to New Hampshire voters and Republicans nationwide. And against Rubio’s disdain for experience, he scoffed. “You have not been involved in a consequential decision where you had to be held accountable,” Christie said. “You just simply haven’t. And the fact is—when you talk about the Hezbollah sanctions act that you list as one of your accomplishments, you weren’t even there to vote for it. That’s not leadership. That’s truancy.” He finished with a swipe. “I like Marco Rubio, and he’s a smart person and a good guy, but he simply does not have the experience to be president of the United States.”

In this debate, the candidates could respond to one another, and Rubio countered with a swipe at Christie’s record on fiscal management, accusing the governor of worsening New Jersey’s debt problem. And then he did something strange. He slipped back into his line about Obama.

“But I would add this,” Rubio said. “Let’s dispel with this fiction that Barack Obama doesn’t know what he’s doing. He knows exactly what he’s doing. He is trying to change this country. He wants America to become more like the rest of the world,” ending in the same place he had finished just a few minutes earlier.

Immediately, Christie pounced, locking eyes with the camera as he slammed Rubio for the strange repetition.

“You see, everybody, I want the people at home to think about this—this is what Washington, D.C., does,” said Christie. “The drive-by shot at the beginning with incorrect and incomplete information, and then the memorized 25-second speech that is exactly what his advisers gave him.” He continued, moving from a body slam to a pile drive. “See, Marco, the thing is this: When you’re president of the United States, when you are a governor of a state, the memorized 30-second speech where you talk about how great America is doesn’t solve one problem for one person. They expect you to plow the snow. They expect you to get the schools open. And when the worst natural disaster in your state’s history hits you, they expect you to rebuild their state, which is what I’ve done. None of that stuff happens on the floor of the United State Senate.”

Rubio tried to respond. He tried to jab Christie for his absence from New Jersey from the storm. But his hits wouldn’t land. He was too flustered.


At this point, Rubio could have ended the exchange with silence. Instead, he went back to his talking points. He repeated himself about Obama.

Christie cut him off. “There it is! There it is. The memorized 25-second speech. There it is, everybody.” The fight was over. Rubio was shook. Later in the night, Rubio would fall into that rhetoric again, unable to break from his stump speech.

Eventually, aided with questions on foreign policy, Rubio recovered. But even with a strong finish, it’s hard to say he ended in a good place. Rubio didn’t just embarrass himself; he undermined the core argument for his campaign—that we overrate experience and underrate vision and resolve. And worse, it was on video: a short clip to show on news networks or cut into a negative advertisement. “Rubio’s repeat” will have a long life on daytime cable and late night comedy, an awkward, brutal, cringeworthy display of political failure.

Rubio needed a win on Saturday. He needed to show Republicans that Iowa wasn’t a fluke, that he could consolidate support and charge ahead of Donald Trump and Sen. Ted Cruz. Instead, at best, he gave a mixed performance, with good answers overshadowed by one of the most uncomfortable moments of the entire Republican debate season.

It’s far too much to say that it will cost him the nomination. But it could push him down the ladder in New Hampshire and create renewed chaos in the nomination fight, as candidates such as Jeb Bush, Christie, and Gov. John Kasich rise, and Trump—largely unscathed—holds his spot on top.

Posted by Michael-in-Norfolk at Sunday, February 07, 2016

And it's not going to help Rubio that his major endorser, Frothy, is on tape as being unable to think of a single thing that Rubio has done. And I hope that people will remember -- which means that us Dems should not forget to remind, should the occasion arise -- that Rubio had problems trying to keep straight even the record of when and how his own personal parents arrived in the U.S. of A.