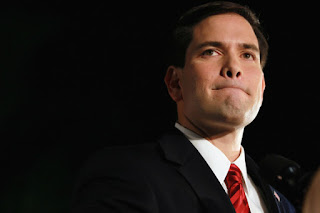 If Republicans come to their senses - admittedly a very big if - they ought to latch onto John Kasich, the lone truly semi-sane occupant of the GOP clown car.  Perhaps with his second place showing in New Hampshire and the hopeful demise of some of the lower placing GOP candidates Kasich can gather strength and move to challenge the know nothing lunacy of Donald Trump whose victory speech was little more than a string of sound bites bordering on gibberish.  The best news out of New Hampshire is the hopefully permanent self-destruction of Marco Rubio and less than top showing by the very scary Ted Cruz.  A column in the Washington Post looks at Rubio's welcomed collapse.  Here are excerpts:

Let’s dispel once and for all with this fiction that Marco Rubio knows what he’s doing.

A week ago, the youthful senator from Florida was in great shape. His surprisingly strong finish in the Iowa caucuses left him with a clear chance to consolidate mainstream Republican support — and a path to the GOP presidential nomination.


But in just a few minutes Saturday night, Rubio undid everything he had worked for during the past year — really, the past five years. His singularly disastrous debate performance, in which he repeated irrelevant, canned phrases, caused would-be supporters to flee for Ohio Gov. John Kasich and other more stable candidates.

Typically, Iowa and New Hampshire serve as proving grounds for the candidates. Voters there scrutinize the contenders, who rise and fall in the polls as various candidates gain and lose the status of front-runner. But Trump’s celebrity short-circuited the process. With Trump dominating the coverage and the polls, Iowa and New Hampshire failed to fulfill their traditional vetting roles.

Rubio was one who never got the scrutiny. And when he emerged, blinking, into the spotlight after Iowa, voters found an empty suit. Watching him campaign last week, I wrote: “Rubio’s strong Iowa finish has brought new attention — and overcapacity crowds — in New Hampshire. But the would-be supporters are greeted by a robot.”

He had seemed to be a good debater — but with 10 or more candidates crowding the stage in early debates, he didn’t have to go far beyond canned lines. On Saturday, exposed to withering attacks from rival Chris Christie, a former prosecutor, Rubio suffered what was perhaps the most memorable lapse at the presidential level since Edmund Muskie appeared to weep in the New Hampshire snow in 1972.

The reviews were savage, and then, on Monday night, RubioBot malfunctioned again.

Exit polls left little doubt that Rubio’s glitches ruined his prospects in New Hampshire. Two-thirds said the debates were important, and of the nearly half of GOP voters who made choices in the last few days, Kasich did far better than Rubio.

The results also left Republicans, once again, without a consensus alternative to Trump — and with dwindling hope of finding one. Had Rubio received scrutiny earlier, voters might have been able to find a candidate who didn’t wilt in the spotlight. But Iowa and New Hampshire didn’t serve their functions this time. Trump got in the way.