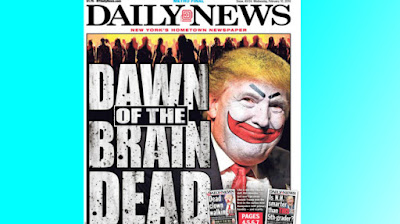 The front page of the New York Daily News' Wednesday issue featured Republican presidential candidate Donald Trump wearing clown makeup alongside a horde of "brain dead" zombies the newspaper suggested had voted for him in the New Hampshire primary.

Perhaps on the bright side, John Kasich - in my view, the only have sane GOP candidate - finished second on the GOP side and empty suit/pandering whore Marco Rubio seemingly will find homself in 5th place.  Here's more from Talking Points Memo on the GOP results:

Trump's anti-Islamic and tough-on-Mexico rhetoric has had staying power and catapulted him ahead of a wildly divided establishment-lane race, where establishment candidates like former Florida Gov. Jeb Bush, Ohio Gov. John Kasich and New Jersey Gov. Chris Christie have each been betting a good showing in New Hampshire would let them break through.

The order of finish after Trump was expected to be tight and not known potentially for several hours.
Even after a disappointing second place finish in Iowa, Trump's win in New Hampshire puts him back in the the driver's seat as the race moves to South Carolina and then the Southern-focused Super Tuesday elections.

Many view Trump as a liability for the party with his off-the-cuff pontificating and policies to bar any Muslims from entering the country.

The major question for Trump is if he can keep up his lead as he heads into the South Carolina primary where Cruz is expected to resonate with evangelical voters like he did in Iowa. Cruz has also been spending quite a bit of time down south in anticipation of Super Tuesday.

As for the Democrat contest, Think Progress has these details:

Young people, independents, women, rural voters, and gun owners came out in droves to vote for Sen. Bernie Sanders (I-VT) in the New Hampshire presidential primary on Tuesday, driving the self-proclaimed Democratic socialist to a wide-margin victory over his opponent Hillary Clinton.

In fact, almost every demographic group — men, women, first-time voters, past voters, non-gun owners, middle-income people, low-income people — gave a majority of their support to Sanders, according to the New York Times. According to the Times, Sanders only lost to Clinton among voters 65 and older, and voters in families earning over $200,000 per year.

I remember being young and idealistic politically, but as much as Sanders holds positions that are attractive, the real issues are, (i) can he win in November, and (ii) if, elected, could he deliver what he has been promising?  I continue to feel in my gut that the answer to both questions is no.  If that is the case, why give the White House to the GOP?
Posted by Michael-in-Norfolk at Tuesday, February 09, 2016