Randy Forbes to Change Districts to Save His Job 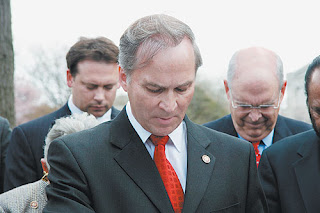 I have known 4th District Congressman Randy Forbes for almost 40 years and the man has gotten crazier and more of a religious extremist with every passing year.  Now, with his district redrawn to undo some of the GOP gerrymandering of Virgina's congressional districts, Forbes has announced that he will physically move his residence and run for the 2nd District seat being vacated by Scott Rigell.  It apparently never crossed Forbes' mind that he could be competitive in the redrawn 4th District if he shed some of his right wing Christian lunacy and focused on issues that matter to voters outside of knuckle dragging Christofascist circles.  One can only hope that the Democrats find a strong candidate to challenge Forbes who is not well known in the 2nd District outside of Republican circles.  A Virginian Pilot editorial takes some shots at Forbes.  Here are excerpts:

U.S. REP. RANDY Forbes announced Monday that he’s running for Congress again. But after 15 years in Virginia’s 4th District, Forbes is jumping to the 2nd Congressional District, based in Virginia Beach. He said he’s seeking the seat U.S. Rep. Scott Rigell is vacating to keep the power of a House Armed Services subcommittee in the hands of a Virginian.

In his announcement, he never mentioned that he’s abandoning the Chesapeake district he’s represented since 2001 — the district where he was born and grew up — to have a better chance of remaining in Congress.

He didn’t mention that the district that was drawn specifically for him in 2002 — a district so solidly Republican that Forbes has had only token opposition in his re-election bids — has been redrawn by the federal courts and is now more Democratic.

The conservative congressman, who touts his protection for the unborn, his A rating from the NRA and his stands for religious liberty as important identifiers, would have a hard time defending his record successfully in the redrawn 4th. He’d also have to defend his sponsorship of only one piece of successful legislation: To rename a post office.

This effort at self-preservation is why drawing districts for Congress and the General Assembly should be the responsibility of an independent commission, not lawmakers seeking to maintain jobs for themselves and their political allies. State lawmakers drew a safe seat for Forbes in 2002 and again in 2012 by packing African American voters from Richmond to Norfolk into the 3rd Congressional District.

The Conservative Review describes Forbes this way: “Forbes is primarily a backbencher, except when it comes to national security issues, which are his passion. ... He is also a leading voice warning against the rise of China as a global power. He formed and chairs the Congressional China Caucus which studies the rise of China.”

Forbes’ legislative battles and abiding passion have centered on social issues, an unnecessary and divisive distraction in a Congress marked by its inability to do anything constructive.

With the courts’ redrawn districts, Forbes had an opportunity to defend the record he’s compiled in his home district and the clout he’s accumulated. Instead of fighting for what he believes in, Forbes fled next door.

I hope Forbes' gambit fails and that he is voted out of office in November.  Hampton Roads needs a serious, objective reality accepting member of congress.  That doesn't describe Forbes.
Posted by Michael-in-Norfolk at Tuesday, February 09, 2016