The Rise of the Unfit: Trump, Cruz and Rubio 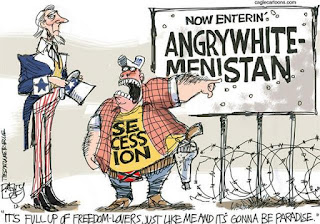 Watching the New Hampshire primary results come in, I am again struck by how far the Republican Party has sunk into insanity.  Exit polls of Republicans - much to the probable delight of ISIS and Al Qaeda and their propagandists - support a bar of Muslims entering into the United States.  The racism is palpable. On the other side of the aisle, Bernie Sanders scored a victory, but to my mind the question that his supporters are ignoring is this: can he win in the general election in November?  With potentially two or more Supreme Court justice openings over the next four years, few things could be as devastating to the nation that a Republican in the White House making the appointments.  But back to the train wreck in the GOP clown car.  A piece in Huffington Post looks at the descent of the GOP into the realm of insanity and nihilism.  Much of the fault lies with the so-called Republican establishment which, in the process of chasing short term wins, created a monster.  The only off piece in the article is that Rubio has apparently taken 4th place in New Hampshire, not that he isn't unfit for the presidency. Here are excerpts:

[T]that death knell we are hearing is not just the mercy killing of walking footnotes like Carly Fiorina. It is for the GOP establishment and, more profoundly, for the very idea of what a president should be.

The ruin of the established order -- big donors, lobbyists, and professionals -- has been a long time coming. For decades the establishment has resembled the once proud family who keeps selling off pieces of their estate so they can keep the house. In exchange for lower taxes and laissez-faire, the establishment subcontracted its electoral fortunes to an overlapping -- and increasingly hostile -- compendium of evangelicals, gun rights advocates, Tea Party fanatics, and less educated whites who feel that their security, and their country, are being snatched from their grasp. Now it is no longer enough to surround the mansion -- they want to burn it down.

The incongruous agent of their resentment has been the billionaire Donald Trump, followed by the self-styled bomb-thrower Ted Cruz. But in great measure what empowers them is the establishment's surrender to nihilistic rhetoric directed at Washington DC. A throng of voters willing to shut down the government is unlikely to nurture tender feelings for the grandees of the GOP. . . .
Trump has simply focused their free-floating hostility on a larger group of scapegoats -- Mexicans, Muslims, rich Republican donors and financiers . . .

Like so many elites who discover that they are widely loathed, the establishment has responded with dithering and wishful thinking. The result is a vacuum that has consumed the very idea of leadership.

Abruptly, some in the party's elite began clutching Rubio like a human life raft, praying that he emerges from the scrum of New Hampshire as the alternative to Trump and Cruz. Beyond ratifying the impotence of the establishment, their desperation confirms the demise within the GOP of something far more important -- the very idea of what qualifies a person to assume the most complex and demanding office in a dangerous world.

In saner times, there was a general understanding of those elements which might commend a candidate. Sound judgment. A reasonable command of the issues. At least some relevant experience. A grasp of what the job demands which transcends canned speeches and talking points. A balanced temperament. A certain capacity for dignity and grace. At least a few real achievements, not least in the realm of politics. . . . . some combination of intellectual integrity and emotional health that keeps self regard from spinning into sociopathy turbocharged by power: lying without shame, governing without some genuine regard for the governed, a narcissism so deep that it obliterates all else.

In the recent history of the GOP, there were harbingers that these standards were eroding -- that, among a portion of the electorate, all that mattered was anger and disdain for government.

Of the three most likely Republican nominees, none is remotely qualified to be president. Indeed, their unfitness is so patent as to inspire fear.

The challenge with Donald Trump is where to start. Even Ted Cruz pretends that his campaign is about other people. Trump doesn't even get that you're supposed to fake it. His candidacy is, indeed, all about him, . . . Imagine year upon year of crudity, petulance, self-preening and puerile bluster. Imagine Americans' sickening realization that they are trapped in a dysfunctional relationship with a boorish narcissist who has no idea of how to protect their interests, and whose only interest is himself. Imagine the face of America in the world as the face of Donald Trump.

That's for openers. Trump understands nothing that a president needs to understand. His nationalistic promise to "make America great again" is hucksterism devoid of substance.

[I]t says a lot about Ted Cruz that his colleagues would prefer to jump into the abyss with Trump. Indeed, one of the striking features of the GOP debates is his fellow senators' visceral loathing for their peer.

If Trump is Huey Long without a program, Cruz is Elmer Gantry without the charm -- oleaginous, transcendently phony, relentlessly manipulative, and intellectually dishonest to the point of demagoguery. His triumph in Iowa was buoyed by dirty tricks  . . . . He is the dank Prince of darkness, playing on the resentments of evangelicals and others who feel marginalized -- without offering them, or anyone else, an uplifting vision of the future.

Marco Rubio. . . . Here one struggles to capture the depths of his shallowness, a task akin to grasping at vapor. For it is grim testament to Trump and Cruz that they can frighten grown-ups into proposing Rubio as presidential hardwood.

In debate and on the stump, Rubio increasingly tries to compete with Trump and Cruz through hyperbolic excess directed at Obama. With a slightly unhinged zeal, he claims that Obama is so "completely overwhelmed" that he has "deliberately weakened America." Like his indictment of the president as an enemy of the Constitution and the free enterprise system, this over-the-top rhetoric is shamelessly stolen from the hysterical alternate reality of talk radio.

But the effect Rubio achieves is not that of a prospective commander-in-chief, but that of a callow aspirant who is over caffeinated, shrill, and willing to say anything -- a man wholly lacking in balance or intellectual ballast. One thinks not of a leader, but of an overambitious sales guy looking for a promotion he doesn't deserve -- say, perhaps, to district manager.

Posted by Michael-in-Norfolk at Tuesday, February 09, 2016