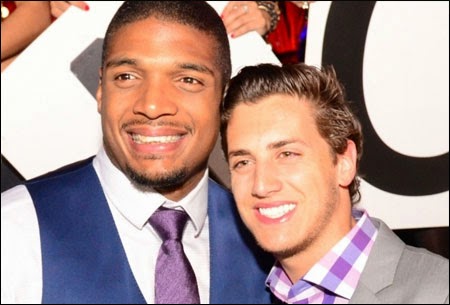 The haters at the American Family Association will have to ramp up yet another unsuccessful boycott campaign in the wake of the St. Louis Rams' signing of a four year, multimillion dollar contract with openly gay Michael Sam (pictured above with his boyfriend).  The contract hopefully will put to rest for good the claims that no NFL team would ever sign an openly gay player.  The New Civil Rights Movement looks at this development. Here are some highlights:

The St. Louis Rams have signed Michael Sam to a four-year, $2.65 million dollar contract, officially making him the first openly gay player to be hired into a mainline professional sports team.

The Rams made the announcement yesterday afternoon, and in fact hired all eleven picks from their entire 2014 draft class.

In early February, Michael Sam announced that he is gay, not wanting to surprise a future employer. He has become a flash point for conservatives, one that exploded when he was drafted into the NFL last month. Sam, as many players do, kissed his significant other — in this case, a man — infuriating social conservatives who thought it was a ratings plot by ESPN.

Very Happy for him, I hope he has fun and does a Wonderful job for his new team and us fans. He and his honey look very nice together. Good Luck Sam. John.