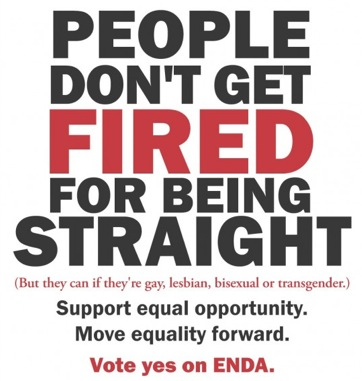 The text of President Barack Obama's proposed executive order barring employment discrimination against LGBT employees has not even yet been released and already the Christofascists and their political whores in the GOP are shrieking and carrying on.  Senator Orrin Hatch of Utah is demanding that any executive order contain a religious exemption that is so broad that it is tantamount to a grant of special rights to Christofascists.   The Washington Blade looks at the exemption that Hatch supported in the Senate version of ENDA:

Under the current version of ENDA before Congress, religious institutions, like churches or religious hospitals and schools, could continue to discriminate against LGBT workers in non-ministerial positions even if the bill were to become law. The religious exemption is broader than similar exemptions under Title VII of the Civil Rights Act of 1964 for categories of race, gender, religion and national origin.

In my view, the larger problem with such an exemption is that it bears no relation to the intention behind the First Amendment of the U.S. Constitution which sought to guarantee that no citizen would (i) be forced to support a religion that they did not adhere to or (ii) find limitations placed on their right to freely worship.  In fact, an exemption such as what Hatch wants would allow the Christofascists to trample of the religious freedom rights of LGBT citizens who have a constitutional right to NOT adhere to Christofascist and far right Muslim beliefs.


Meanwhile, the hate merchants at Family Research Council are beside themselves over Obama's partial end run around the bar to ENDA that their boot licking GOP members of the House of Representatives have maintained to date.  Right on cue, FRC is whining that the proposed executive order is an attack on Christians and an attack on free speech.   As is ALWAYS the case with FRC it wants special rights for Christofascists.  Here is a sample of the disingenuous drivel and lies on its blog page:

Today's announced executive order will give activists a license to challenge their employers whenever they feel aggrieved, exposing those employers to threats of costly legal proceedings and the potential of jeopardizing future contracts. Furthermore, by requiring federal contractors to consider characteristics and behaviors related to a person's sexual orientation or gender identity, this policy will make contractors liable for protecting actual or perceived self-disclosed and fluid identities that may not even be known.

I'd suggest that if FRC doesn't want protections for LGBT employees, let's open the door for employers to fire far right Christians because  their behavior is clearly a "choice" and is not an immutable characteristic.    Let's treat the "godly folk" the same way that they demand to be allowed to treat others.  I may sound peevish, but I am SO OVER the undeserved deference that religion is afforded even though it has caused more wars, deaths and unbridled hatred than almost any other thing across history.

You're last paragraph says it all. This belongs on all the mainstream outlets.