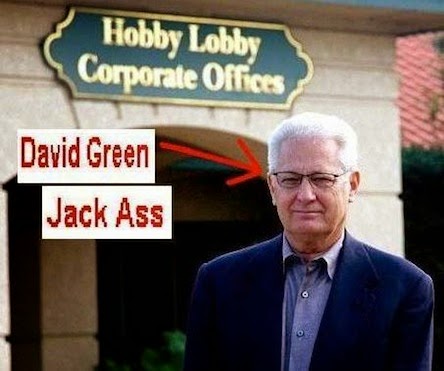 As readers of this blog know very well, I hold nothing but contempt for Christofascists - especially those who claim to support the U.S. Constitution while in fact seeking to subvert it and destroy the rights of others.  A case in point: the evangelical owners of Hobby Lobby founder which has brought a lawsuit challenging the contraception mandate of the Affordable Care Act.  A piece in Politico looks at the theocratic agenda of these people and their goal of limiting the constitutional rights of others.  It is another example of how the disingenuous cry of "religious liberty" is being used to deprive others of the religious liberty that the Christofascists want only for themselves.  Here are article excerpts:

The evangelical owners of Hobby Lobby made a fortune selling crafts supplies and made headlines fighting government-mandated birth control coverage. They’re also using their billions to sell the American public on the literal truth of Scripture — through a public-school Bible curriculum, a huge museum around the corner from the Smithsonian and public forums on the faith of the founding fathers.

The Green family may be best known in secular circles for their lawsuit against Obamacare, a high-stakes — and highly political — case that could undercut the administration’s goal of setting minimum standards for health care coverage. By the end of this month, the Supreme Court will decide if the federal government can force the Greens to include methods of contraception they deem sinful as part of employees’ health insurance.

The pending Hobby Lobby ruling has thrust the Greens into the national spotlight, but the family’s mission is far bigger than a single court case. They’re spending hundreds of millions on a quiet but audacious bid to teach a wayward nation to trust, cherish — and heed — the Bible.

Most provocatively, they’ve funded a multimillion-dollar effort to write a Bible curriculum they hope to place in public schools nationwide. It will debut next fall as an elective in Mustang High School, a few miles from Hobby Lobby’s Oklahoma City headquarters.

A draft of the textbook for the first of four planned yearlong courses presents Adam and Eve as historical figures and introduces God as “faithful and good,” “gracious and compassionate” and “an ever-present help in times of trouble.” A list of “curses for disobeying the Lord” warns of defeat, fever and “disaster and panic in everything you do.”

Hobby Lobby founders David and Barbara Green and their three adult children — sons Steve and Mart and daughter Darcee Lett — have donated generously to Christian institutions over the years, but these projects are on another scale entirely. A source close to the family estimates the museum alone will end up costing as much as $800 million, including the acquisition of thousands of ancient artifacts.

The family’s vision is beginning to stir concern, not just among the ACLU and atheist groups such as the Freedom From Religion Foundation, but even from some Bible scholars.

The plans that have been made public so far — including the high school curriculum — seem aimed at portraying Scripture as historically accurate and an unequivocal force for good, said John Kutsko, executive director of the international Society of Biblical Literature, the oldest and largest organization dedicated to Biblical scholarship.

That approach fails to incorporate the latest scholarship, acknowledge that the Bible has also played a role as a tool of oppression or recognize different religious viewpoints, Kutsko said.
“It’s a simple, superficial, literal reading of the Bible,” Kutsko said.

As presented, the curriculum is “startlingly irresponsible” — and likely unconstitutional, as well, since public schools are allowed to teach about religion but can’t promote any particular theology, said Mark Chancey, a professor of religious studies at Southern Methodist University who has reviewed the text.

Eventually, the foundation developing the curriculum hopes to sell it to districts across the nation. Steve Green has said he dreams of it one day becoming a mandatory course for all high school students.

These people and Christofascists like them are an insidious cancer and a clear a present danger to the freedom of others.  The sooner that the larger society recognizes the danger and the theocratic goals of these folks the better.  it goes without saying that I will never be found darkening the threshold of a Hobby Lobby store.