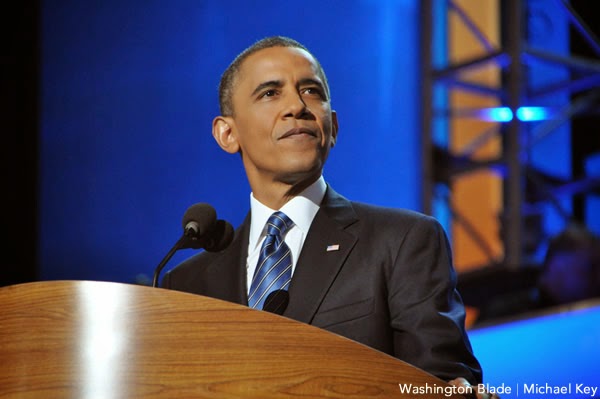 With ENDA blocked in the House of Representatives, Barack Obama has finally indicated that he will sign an LGBT nondiscrimination executive order applicable across the federal government and federal government contractors.   In my view, the move is long over due and, the cynic in me suspects that Obama has finally made this move in the hope of re-energizing LGBT voters - and donors to the Democratic Party - in the run up to the 2014 midterm elections.  Sadly, it is a pattern that we have seen before with Obama.    Meanwhile, it goes without saying that the Christofascists will be wailing and letting out spittle flecked shrieks that Obama is destroying America.  MetroWeekly looks at this new development.  Here are excerpts:

According to a White House official, Obama has directed his staff to prepare an executive order for his signature prohibiting federal contractors from discrimination on the basis of sexual orientation or gender identity — a move long sought by LGBT-rights advocates that builds upon Obama’s legacy as the strongest LGBT ally to ever occupy the White House.

“The action would build upon existing protections, which generally prohibit federal contractors and subcontractors from discriminating in employment decisions on the basis of race, color, religion, sex, or national origin,” the White House official told Metro Weekly. “This is consistent with the President’s views that all Americans, LGBT or not, should be treated with dignity and respect.”

For more than two years Obama’s White House has been forced to defend a broken campaign promise made by Obama when he was a candidate for president in February 2008. It was then that Obama filled out a presidential-candidate questionnaire for the Houston GLBT Political Caucus indicating he would support a nondiscrimination policy that includes sexual orientation and gender identity for federal contractors.

At the beginning of this year Obama announced a shifting strategy to use his pen to take executive action when Congress won’t act. While that strategy has been applied to minimum wage, with Obama signing an executive order to raise minimum wage for federal contractors while the White House still pushes for federal legislation raising the minimum wage for all Americans, and to narrowing the income gap between genders, the White House has found itself in a contradictory position on the executive order for LGBT federal contractors.

The Senate approved ENDA 64-32 last November, but the the bill has languished in the Republican-controlled House of Representatives where Speaker John Boehner has voiced his opposition to the bill and refused to allow it to come up for a vote, although the bill has continued to gain bipartisan support as recently as last week.

When Obama does attach his signature to that executive order, it will further cement his legacy on LGBT rights. The first sitting American president to openly endorse same-sex marriage, he has all but ensured that a Democrat will never again be able to run for the White House without supporting marriage equality.

I do appreciate what Obama has done.  I simply find it disheartening that on every advancement, he has needed to be dragged forward instead of demonstrating leadership.
Posted by Michael-in-Norfolk at Monday, June 16, 2014