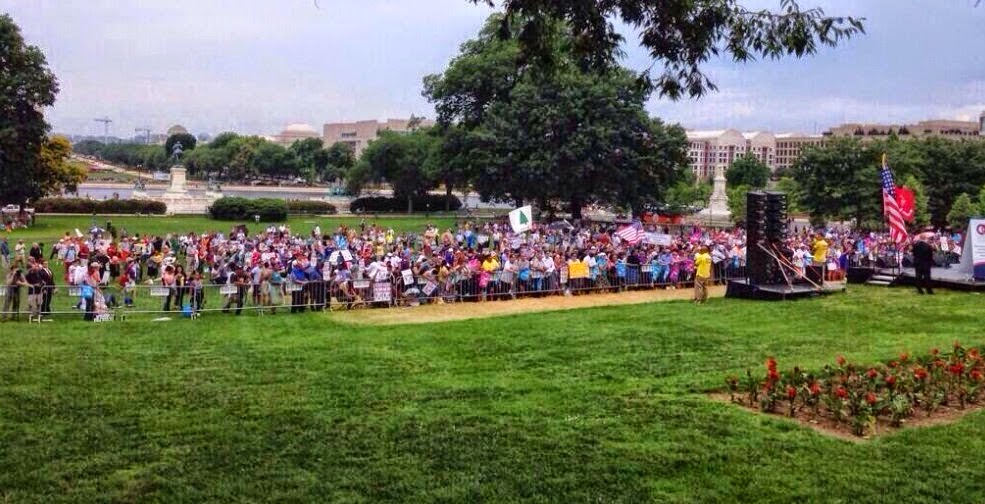 At the March for Marriage rally, hundreds of people cheered and waved signs reading “every child deserves a mom and dad,” and some picnicked while dozens of speakers delivered passionate speeches declaring natural marriage to be the best for the American people before marching down Constitution Avenue, ending their rally in front of the Supreme Court.


With Americans' acceptance of same sex marriage growing at a steady rate, the National Organization for Marriage is struggling to stay relevant and, more importantly trying to maintain visibility so that the ignorant, gullible and out right bigoted can continue to be fleeced for money.  Yesterday, NOM held its much advertised "March for Marriage" in Washington DC.  Despite the publicity, most Americans seem to have yawned and gone about their business while by some estimates only 2,000 or some folks showed up at NOM's event which ended up as a small platform for the usual suspects: theorcrat Mike Huckabee, self-loathing closet case Rick Santorum and similar Christofascists, not to mention a sprinkling of French Neo-Nazis.  Not surprisingly, anti-gay lies were aired with abandon.  The Daily Beast looks at the near non-event.  Here are highlights:

Steps from our nation’s Capitol, I was approached by Morton, a youthful-looking 68-year-old Virginia native with artificially blond hair and a fistful of flyers that read, “Gay Greed” and “Gay Sex Leads to Adult Diapers.”

Welcome to the second annual March for Marriage, a friendly gathering of a few thousand concerned Americans, that is, according to its website, “poised to become an essential and indispensable vehicle for voicing the values of pro-marriage Americans in a way that cuts through the biased media narrative and demands hearing in the halls of power.”

Rick Santorum, former U.S. senator from Pennsylvania and former presidential candidate, took the stage and told the enchanted crowd (although, it might have just been heat exhaustion) that it was their responsibility, together, to “reclaim” the institution of marriage. “That’s on us,” he said.

In between speakers, some attendees walked around wielding sings and some prayed—with their arms stretched toward the sky. Others clutched rosary beads. Actual priests (and a few rabbis) circled, holding religious texts and offering wisdom to passersby.

Former Arkansas Governor and perpetual presidential prospect Mike Huckabee kicked off his remarks with a dig at President Obama, who infamously “evolved” on gay marriage.

[M]any who oppose same-sex marriage have—as public opinion increasingly sides against them—begun to express their concern that they are being victimized by its proponents—Tony Perkins of the Family Research Council went as far as to liken it to McCarthyism. And that sentiment was palpable at the March for Marriage.

All in all, it was a pretty pathetic event - just like its organizers and participants.
Posted by Michael-in-Norfolk at Friday, June 20, 2014