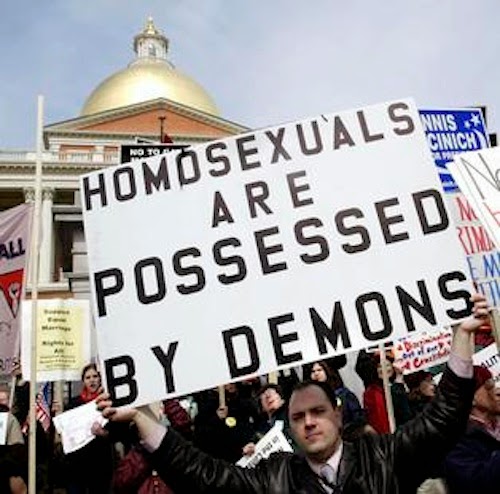 Many of us have predicted that as the Christofascists continue to lose the so-called culture wars and become in the long term increasingly irrelevant - at least outside of GOP circles - that they would be come more shrill and more hysterical.  The constant bleating one hears of alleged persecution of Christians is but one of the symptoms of the reaction of these fear and hate filled peoples' loss of their previous superiority (even if largely imagined) and the larger society's refusal to continue to give them deference.  A piece in The Daily Beast looks at the anti-gay backlash occurring in parts of red America as the Christofascists face the death throes of their ability to persecute others and claim special rights from themselves.  The piece underscores that in the final analysis, the Christofascists are selfish, self-centered individuals and that hate and animus towards others is their true creed.  Here  are excerpts:

Everything is coming up roses for gay and lesbian Americans. Same-sex marriage, a political non-starter only a few years ago, now enjoys solid majority support in national polls. Federal judges are falling over each other ordering states to allow it. Yet instead of howling about judicial tyranny, the country yawns, and politicians who not long ago railed against gay marriage now scramble to change the subject. Today, unlike ever before, most Americans have openly gay friends, colleagues, and family members, and most approve of same-sex relationships. Young people are overwhelmingly gay-friendly, leaving little doubt which way the trends are going.

If opponents of gay rights are supposed to be retreating into oblivion, they missed the memo.

* Rick Perry, the governor of Texas and a possible 2016 Republican presidential candidate, on Wednesday compared homosexuality to alcoholism.

* As if to drive the point home, the Texas Republican Party, at its annual convention, endorsed so-called “reparative therapy,” a quack regimen that reputable psychiatry roundly condemns.

* Meanwhile, in Oklahoma, Scott Esk, a conservative candidate for the state House of Representatives, approvingly cited Biblical passages that he interpreted as prescribing the death penalty for homosexuals. “I think we would be totally in the right to do it,” he said in a Facebook post. “Ignoring as a nation things that are worthy of death is very remiss.”

Are we seeing a backlash against gay rights and same-sex marriage? Not in the country as a whole. Hostility to homosexuality is withering. But it is not going away. Rather, it is becoming a counterculture—as, ironically, gay culture itself once was. That is, it is becoming a self-sustaining worldview that defines itself in opposition to the mainstream and is seen as a source of identity for many who hold it.

Foremost among the currents that sustain it is religion: specifically, evangelical Protestantism.

Pew finds white evangelicals saying that homosexuality should be discouraged by society rather than accepted, again not narrowly but by a two-to-one margin.

Evangelicals’ strong moral condemnation of homosexuality and gay marriage puts them distinctly out of step with most of the rest of society, but that does not mean they will be quick to rethink.

Evangelicals are, and will remain, a large and critical element of the Republican base. Three-quarters of them supported Romney in 2012. No wonder the GOP is having so much trouble with gay marriage: opposing it alienates younger voters, but supporting it angers evangelicals.

The red states are changing, but slowly. In the meantime, it is not surprising to see the anti-gay counterculture pushing back.

The counterculture, then, may be a national minority, but it draws support and sustenance from its bases in the evangelical world, the Republican Party, and culturally conservative states. In all those places, being condemned as “bigoted” by coastal progressives is probably not going to change minds.

The Supreme Court could order gay marriage nationwide next year, but that would not make the country’s countercultural enclaves more hospitable to the many gay people and families who live there. It is tempting for gay-rights advocates to imagine that a national majority is the same as a national consensus. In reality, there is still far to go from here to there, and complacency isn’t called for.

Like it or not, it is likely that the U.S. Supreme Court will rule for marriage equality on a national level within the next year to year and a half.  The Christofascists may be striving to fight back, but ultimately most of society will come to see them as the modern day equivalent of the segregationists of the 1960's.  Little by little it will be they, not the gays, who are viewed as despicable social outcasts.  That day cannot come soon enough.

Email ThisBlogThis!Share to TwitterShare to FacebookShare to Pinterest
Labels: future of the GOP, modern day segregationists, red states, religion as a justification for evil, religious based bigotry, same sex marriage

A side note: The photo is an old one of the demonstrations for and against marriage equality in front of the Mass. State House when Mr. Etch-A-Sketch was making it clear that he was NOT going to be better for equality than Ted Kennedy. (In contrast, marching in yesterday's Boston Pride parade were Governor Patrick, Senators Warren and Markey, Cong. Kennedy and Tierney, Mayor Walsh, and a swarm of other politicians and lots and lots of other people.)

Here is my comment on Scott Esk's website:
I am a Christian.
I am against abortion as a method of birth control.
I am a gun owner who cherishes his 2nd Amendment rights.
My family is awesome and I love them all (is that family values?).
I support lower taxes and less government spending.
I am a small business owner.
I am also gay.
So I should be put to death? (“I think we would be totally in the right to do it,” you said in a Facebook post. “Ignoring as a nation things that are worthy of death is very remiss.”)
What about divorce? Tattoos? Short hair? Shellfish?
You're a screwball who belongs in an insane asylum.
I pray that voters in Oklahoma turn you down at the ballot box.