McAuliffe Annouces That He Will Move Ahead on Medicaid Expansion 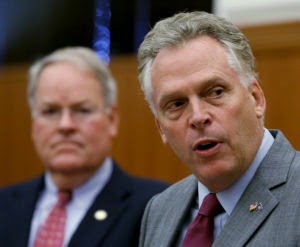 Signaling that he will move ahead with Medicaid expansion in Virginia - a move that will provide health care to some 400,000 that the Virginia GOP and its Christofascist puppeteers would kick to the gutter - Governor Terry McAuliffe has vetoed a provision of the budget passed by the GOP controlled General Assembly that would have barred Medicaid expansion.  He also vetoed several spending provisions which he said were unwise when Virginia cannot even provide for its neediest citizens.  Legal challenges will no doubt ensue as the Virginia GOP seeks to continue its war on the poor and working class families.  Here are highlights from the Richmond Times Dispatch:

Gov. Terry McAuliffe said today that he will sign the state's two-year budget, but veto an amendment that seeks to tie his hands on Medicaid expansion.

The governor also said he will use his line-item veto to defund the legislature's Medicaid Innovation and Reform Commission, calling it a sham that has blocked implementation.


The governor said he is "moving forward" on health care expansion and has ordered Secretary of Health and Human Resources Bill Hazel to put a plan for expansion on his desk by Sept. 1.

McAuliffe called the expansion of health care to the uninsured "a moral imperative," and promised to "move forward in the face of the demagoguery, the lies, fears, and cowardice that have gripped this debate for far too long."

State legislators approved a two year budget the night of June 12, breaking an impasse, but they included an amendment that seeks to bar Medicaid expansion or a private option without approval of both houses of the legislature.

During a news conference at the Patrick Henry Building in Richmond, McAuliffe said Republicans in the General Assembly had refused to compromise, turned their backs on Virginians who need health care and forfeited millions of federal dollars.

He said he will block funding to rehabilitate the General Assembly Building and Old City Hall, saying the state cannot rationalize the expense when it cannot afford to aid the homeless.

Sen. Jeff McWaters, R-Virginia Beach, said he has written to Attorney General Mark R. Herring, asking for an opinion as to whether it is constitutional for the governor "to remove language from the budget that is not tied to a specific appropriation" and whether he believes the governor can expand Medicaid unilaterally."

Earlier today, Herring, a Democrat, issued a statement in which he expressed support for the governor's push to expand health coverage, but did not address the underlying legal questions.

Republican leaders in the House of Delegates said in a statement this afternoon that they believe the governor is exceeding his constitutional authority and they threatened legal action.