Rick Perry's Homophobia Is a Choice 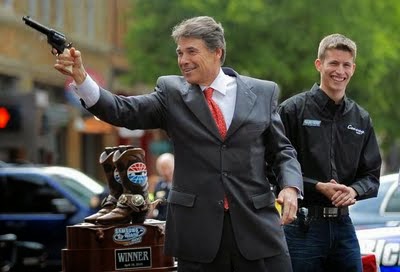 Time and time again we hear the Christofascists and their political whores in the Republican Party claim that sexual orientation is a "lifestyle choice."  If that's the case, then breathing is a lifestyle choice.  The reality is that in the realm of gay rights, the only choice is whether or not one will choose to be a homophobic bigot.  This is especially true since every legitimate medical and mental health association in America has concluded that sexual orientation is something innate and unchangeable despite all the false claims of the snake oil merchant "godly Christians."  Thus, it comes down to the question of whether or not one will choose to embrace ignorance and bigotry or not.  Rick Perry among others in the GOP have made it clear that they deliberately choose homophobia which equals the celebration of ignorance and bigotry.  Something in my view that proves them incompetent to hold elected office.  A piece in U.S. News & World Reports takes Perry and by extension his GOP cohorts to task.  The column rightly notes that (i) when one is a white homophobe, it is a safe bet that one is also usually  a racist, and (ii) that if anything is a choice, it is religious belief.  Here are highlights:

Texas Gov. Rick Perry should seek treatment for his addiction to homophobia. Earlier this week, at a public event in San Francisco, he said that being gay is the same as alcoholism – something to be cured.

No surprise. Perry’s brethren in the Texas GOP released a draft of their platform last week that included language supporting reparative therapy, a scientifically debunked treatment program designed to re-orient a gay person’s sexual identity with Ludovico aversion techniques, such as electrocuting a person’s genitalia or injecting them with nausea-inducing drugs while showing them homoerotic films and pictures.

Perry’s homophobia has informed much of his politics. During his 2012 presidential election campaign, he ran an ad comparing the repeal of Don’t Ask Don’t Tell with keeping prayer out of school. In 2005, he said if gays like another states’ laws, they should move to that state. In 2003, he signed the Texas Defense of Marriage Act, which prohibited any political entity in the state from recognizing same-sex unions. Perry used this law last year to defy the Pentagon by ordering Texas Military Forces offices to not process marriage benefit applications from gay and lesbian servicemen, . . .

Perry’s dislike for those not like him also extends to African-Americans. Last March he said that he didn’t think Ted Nugent calling President Obama a subhuman mongrel was racist. The following month, during a CBS "This Morning" interview, he refused to denounce Nevada Rancher Cliven Bundy's racist tirade, even though other prominent Republicans had. Perry hailed Bundy as a states' rights hero.

Perry’s comments touch on a question that has shaped the discussion of gay rights for some time: Is being gay a choice or genetic? . . . .  The answer to this question is moot. We have numerous laws on the books that protect people from discrimination for both their choices (e.g. religion) and genetics (e.g. race and gender). Moreover, a majority of the public supports gay rights. Sixty-six percent believe gay or lesbian relations between consenting adults should be legal, while nearly 60 percent find that it’s morally acceptable.

There is no debate here. Regardless of what Rick Perry and some of the other inmates now running the asylum formerly known as the GOP say, gay people will get all of the same rights and protections any other citizen enjoys.

First, the best for your new job.

But then, it's remarkable how the people who claim the loudest that they really really love Jesus and that the Bible, contradictions and all, is the inerrant word of God go far out of their way to make sure that their purported lord and savior remains or becomes hungry, sick, homeless, and friendless (Matthew 25:41 ff).

But then, as you noted, it's remarkable how readily Christianists float from one sect to another. One would think that they don't really realize that there are ostensibly differences other than social status in the local community between them.

I don't know if you saw this, but I swear, every time those people open their mouths they come off sounding like complete and total idiots!