John Paulk: To Straight and Back - The Ex-Gay Myth 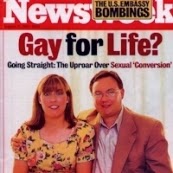 Despite all of the medical and mental health knowledge to the contrary and despite the growing acceptance of gays by Americans, the Christofascists continue to strive to maintain the myth that gays can "change" and/or that homosexuality is a "choice."  Illustrating just how much control the Christofascists now have over the Republican Party, the Texas GOP recently added support for "ex-gay" conversion "therapy" to that state's GOP party platform.  The manner in which today's GOP rejects knowledge and fact is indeed stunning.  Few people have played a more prominent role in the "ex-gay" myth that John Paulk, the former poster boy for ex-gays for pay who even appeared on the cover of Newsweek with his still closeted wife.  In a front page piece in Politico, Paulk comes clean on the lies he helped perpetuate and unloads on Rick Perry and the Texas GOP among others.  Seemingly, Paulk feels shame and remorse for what he did  even though in some ways he was a victim of the Christofascists who happily played upon his psychological needs and desire to be "what was expected."  Having spent 37 years of my own life in denial and filled with self-loathing, I can identify with what Paulk has to say.  Here are article excerpts:

There was a time in my life when I used to sound a lot like Rick Perry. In fact, for more than ten years I was one of the nation’s leading spokesmen for the “ex-gay” movement. I traveled the country telling audiences that being gay was a preventable condition, and it could be treated if only you followed a simple plan, obeyed God and sought repentance for your sins. “Ladies and gentlemen, homosexuality is not a genetic, inborn condition,” I would say. “It is the result of traceable causes that, once unraveled, can bring about understanding and transformation in the life of one who is motivated and submitted to God.”

Oh, I was a believer: Homosexuality was just WRONG. And I was Exhibit A, a self-declared convert who had managed to overcome my own shameful gay past. I even appeared on the cover of Newsweek magazine in 1998, posing alongside my wife as a poster boy for “going straight.” And I was happy to do it: Those stories gave me a national platform to advocate for what is called “gay reparative therapy”—basically, convincing gay people that they were sexually “broken” and could be provided with a way to change.

But I was in denial. It wasn’t in fact true, any of it. Worse than being wrong, it was harmful to many people—and caused me years of pain in my own life. Which is why I have this to say to the Rick Perrys of the world: You don’t understand this issue. At all.

What worries me more is the ignorance betrayed by Perry’s comments—an ignorance that I believe is still widespread among conservatives in the straight world—about what being gay means. The kind of ignorance revealed by those in Perry’s Texas Republican Party who recently inserted a plank in their party platform declaring homosexuality to be a “chosen behavior” and recognizing the “legitimacy and efficacy” of gay reparative therapy.

As long as this widespread misunderstanding in the straight world about homosexuality persists, that it is a choice or a “lifestyle,” as Perry put it, not only will we never be fully accepted by society, some of us will remain unable to accept ourselves. It’s internalized homophobia: you hate what you are. It is a form of self-inflicted torture that has haunted me my entire life, and I do not want young gay women and men today to go through what I went through. I want to tell them—and Rick Perry: We are not broken, damaged, inferior or throwaways. We are created in the image of God—just like everyone else.

I came out as a senior in high school in Ohio and embraced my homosexuality. I found wide acceptance within my family, and I lived openly as a homosexual until the age of 24. But around that point in my life I found myself becoming very despondent, even suicidal. I attributed my unhappiness to my homosexuality. In reality, I was tremendously insecure, lonely and searching for an identity. I could no longer accept myself.

[T]he campus pastor introduced me to Christianity. I told him, “God can’t love me because I’m gay.” The pastor replied, in essence, that this wasn’t true, that God could love me, but he added that if I continued being gay, God would not be pleased with my life. I came to believe that homosexuality was something that God was against, and if I continued to embrace it, I would not be pleasing to Him. And I very much wanted please Him.

I signed up for a year-long residential program called “Steps Out of Homosexuality.” There were 12 of us in a house, and we ate, worked and did bible study together. We went to church together too. On Tuesday and Thursday nights, we had long discussions about various aspects of homosexuality—including the Exodus view of how it developed from a breakdown in family relationships such as that between a boy and his father. There were plenty of lapses, but we persevered.

Reparative therapy is, by definition, based on the notion that something is “broken” in one’s identity, needing repair. You are meant to feel like damaged goods, and the therapy is designed to fix that.

I so wanted to be and to feel “normal.” I would look at men at the checkout counter wearing wedding rings, and I’d want to be one of them. I thought, if I’m straight I’ll feel normal. In those early days after my conversion, the temptations to be among my gay friends and once again be part of the gay community were so strong that I would kneel down in my bathroom and beg God to help me not be gay.  And so even as I pursued this career as a professional ex-gay man, and raised a family and loved my wife, I was in utter torment.

I struggled off and on with addiction and wanting to take my life. I knew I was living on the inside as two people. I wanted to believe it was true so badly that not only did I lie to other people, I primarily lied to myself. I wanted my homosexuality to change, but the truth is: For all my public rhetoric, I was never one bit less gay.

More and more, when I’d have to get up and speak to crowds about my gay conversion, I felt like a wind-up toy. I’d go back to my hotel room, fall on the bed and start weeping. I thought, “If I have to go out and do that one more time, I will literally throw up.” I was in agony.

Everything began to change in 2000, when I was photographed in a gay bar in Washington, DC. I had not gone into a gay bar since the late ‘80s, and I wasn’t looking for sex. I just wanted to be among my own kind, to feel at home, for a brief period. I was board chairman of Exodus at the time, and after the news broke I had to resign. It was an enormous public scandal.

[I]t was more and more apparent to me that I was what I always had been: gay.   The older I got, the lonelier I was becoming. Three years ago, I was driving down a suburban street and I saw two men holding hands. I burst into tears. I realized that … I wanted to be one of those men. I knew my decision would hurt my wife and family, but I began to move toward authenticity.

In my view, the ones who are "broken" are the Christofascists who do not care how much harm they cause just so that they can try to cling to the house of cards religious beliefs.   Their ultimate fear is that if the few Bible passages they cling to about same sex relationships are wrong, then perhaps the entire Bible is wrong.  Their damaged psyche's cannot bear realizing that they, not gays, are the ones who have been living their lives based on a lie.  Kudos to Paulk for finally accepting the truth.
Posted by Michael-in-Norfolk at Saturday, June 21, 2014