The Cantor Effect for Big Business and the G.O.P. 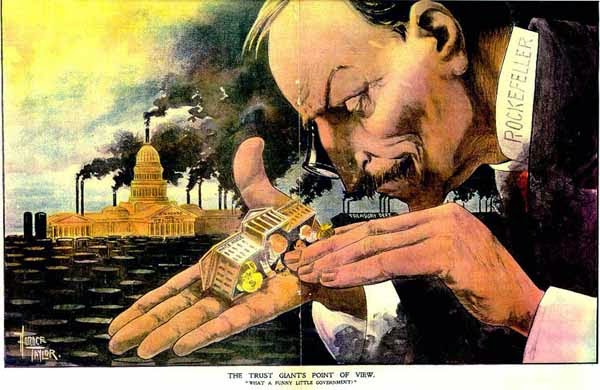 I noted yesterday in a post that Eric Cantor's loss to David Brat had more more to it than Brat's savaging of Cantor for his support for some sort of immigration reform, the theme most talking heads like to latch onto.  Most frighteningly for the so-called GOP establishment and its big business benefactors is Brat's hostility to big businesses and populist message that hearkens back a century ago when big business and the ultra wealthy trampled on average Americans. That populist message ultimately lead to labor unions , the social safety net and other government programs that today's GOP is seeking to dismantle as it works to bring back the Gilded Age of the Astors, Rockefellers, Goulds, et al.  A piece in the New York Times looks at the fear Cantor's defeat has ignited in some in big business circles and within their lap dogs in Congress.  Here are article excerpts:

The day after Representative Eric Cantor became the first congressional leader in modern times to lose his seat in a primary, one of the biggest aftershocks occurred not on Capitol Hill or in the sprawling Richmond suburbs he has represented for more than a decade but on the New York Stock Exchange.

The share price of Boeing tumbled, wiping out all the gains it had made this year, a drop analysts attributed to the startling defeat.

While he was often an adversary to both the Tea Party and Democrats in Congress, Mr. Cantor, a Republican and the House majority leader, was also a powerful ally of business big and small, from giants like Boeing to the many independently owned manufacturers and wholesalers that rely on the federal government for financial support.

His loss at the hands of David Brat, a Tea Party-inspired economics professor who campaigned on throwing corrupt Wall Street bankers in jail, railed against crony capitalism and insisted that immigration reform would only reward lawbreakers, spurred business leaders to mobilize to preserve their clout in Congress.

Mr. Cantor’s loss is much more than just symbolism. He has been one of Wall Street’s most reliable benefactors in Congress. And Mr. Brat used that fact to deride the majority leader as someone who had rigged the financial system. In one recent speech, he accused lawmakers like Mr. Cantor of favoring “special tax credits to billionaires instead of taking care of us, the normal folks.”
The majority leader stopped a provision — reviled by the industry — in the Stock Act of 2012 that would have required hedge funds to disclose more about how they gather market-sensitive intelligence. He battled with conservative lawmakers to extend the Terrorism Risk Insurance Act, a top priority of the insurance industry, which has helped it recover from losses after the Sept. 11 attacks. He helped scuttle White House proposals to collect more taxes from private equity firms.

No industry was more generous to Mr. Cantor’s campaign than financial services. The three largest contributors in this election cycle, in which he collected $5.4 million, were Goldman Sachs, the Blackstone Group and Scoggin Capital Management.

Those business interests, caught off guard by Mr. Cantor’s defeat, are moving quickly to ensure that Mr. Cochran does not meet the same fate.

One priority of business that is in the most immediate jeopardy given Mr. Cantor’s defeat is the Export-Import Bank, which companies like Boeing and General Electric and hundreds of smaller companies rely on to provide subsidized loans to foreign customers. Eliminating the bank has become a conservative cause on par with repealing the Affordable Care Act.

“Cantor was the hub for finance, the hub for a host of big corporations that could trust him to get things done,” said Sean West, the head of United States analysis for the Eurasia Group, which advises corporations about political risk. “He was the one standing between the conservative pitchforks and the business community on a whole host of issues.”

Another issue seen as fundamental to businesses all over but probably more imperiled given Mr. Cantor’s loss is financing for the nation’s crumbling highway system. Many conservatives have balked at replenishing a highway trust fund that is about to run out of money. But business groups, led by the U.S. Chamber of Commerce, have argued that the trust fund is essential for the nation’s competitiveness given the major infrastructure investments made by competitors like China.

What has concerned many businesses with a stake in federal policy is a growing anger on the right from people who can sound more Occupy Wall Street than Tea Party.

“You could even make a case that there’s a lot in common between the Tea Party types and the Elizabeth Warren liberals,” said Gregory R. Valliere, the chief political strategist for the Potomac Research Group. “The impact of what’s happened is going to make Republicans in the House apprehensive about appearing to be too cozy to business.”

Beyond their priorities in Congress, what has unsettled business executives is what they sense as a growing anger over the “corporate welfare” and “crony capitalism” among many associated with the Tea Party.

I find most aspects of the Tea Party to be down right scary, especially the Tea Party elements that embrace ignorance and bigotry.  On the other hand, if insurgents like Brat can push the GOP to cease its war on the working and middle classes, perhaps some partial positive good might come out of the movement.