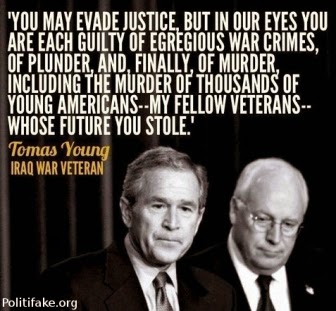 Readers may think that I am beating a dead horse, but the continued shocking behavior and statements of the architects of the Iraq War disaster truly defy belief.  Where is the remorse, where is any admission of error, where is there a scintilla of feeling for the countless lives thrown away?  There is none whatsoever.  Moreover, these people are now blaming the disaster unfolding in Iraq on Barack Obama rather than their own idiocy, lies and hubris.  Equally shocking, is the fact that many of these "doyens" of the far right pretend to believe in "Judeo-Christian" values even as they prove to be the anti-thesis of what a decent Christian ought to be.  Andrew Sullivan lets loose with another volley that focuses on the shameless delusion of these people, including Emperor Palpatine Cheney.  Here are excerpts:

The events in Iraq have unveiled the core reality of that country’s sectarian vortex, but they’ve also revealed something just as disturbing at home. Far from feeling any remorse, or expressing the slightest regret, or analyzing their own catastrophic misjudgments, the architects of the Iraq disaster are actually proud of the devastation they caused for no reason. To read Tony Blair is to witness a mind unsullied by fact or history or responsibility. There is not a scintilla of the self-awareness – let alone the shame – that one might expect from any responsible adult.

If Blair needs help, what can we say of Paul Bremer – yes, Paul Bremer, the man who disbanded the Iraqi military – actually having the gall to go on CNN and blame Obama for his own responsibility for hundreds of thousands of deaths? We have Bill Kristol – with a straight face – actually going on cable news and arguing that not only does the US have to intervene, but that we have to fight both Iran and ISIS and Maliki simultaneously. He actually then has the gall to ask that we do not re-litigate his own record in fomenting this bloodbath!

And now the country’s resident and proud war criminal, with his failed politician daughter, are in on the act. As you might expect, theirs is a poisonous little tract, asserting ludicrously that Iraq was a victory, denying any responsibility for introducing extreme Islamism into Iraq, parlaying their own cronies in the Middle East as representative of anything but their own bubble, and blaming everything, as usual, on the man who has steadfastly managed to de-leverage the US from the Bush-Cheney catastrophe.

This from the man who left office with a cratering economy, two lost wars, a bankrupted Treasury, and a record of torture and military incompetence unknown in modern American history.

What we’re seeing now is the inability of the neocon mind to adjust even a smidgen in the face of empirical reality, to absorb just a soupcon of history, to accept even a minimum of responsibility.

I wish I could say it all as well as Andrew does.  On a personal note, I am bitter.  I nearly lost a son-in-law and my grandson nearly lost his father because of the nightmare that Bush/Cheney and the neocons unleashed on  an all too believing America.   Thankfully, my son-in-law survived, has had a good recovery all things considered and has resigned from the military.  He/we were the lucky ones. Many thousands were not so lucky and these horrible individuals who created the fiasco have suffered no consequences and have shown not even a modicum of shame or remorse.  I truly wish Cheney and Bush would be put on trial for war crimes and in Cheney's case in particular, I believe he deserves a fate like those of the leadership tried at Nuremberg.
Posted by Michael-in-Norfolk at Tuesday, June 17, 2014