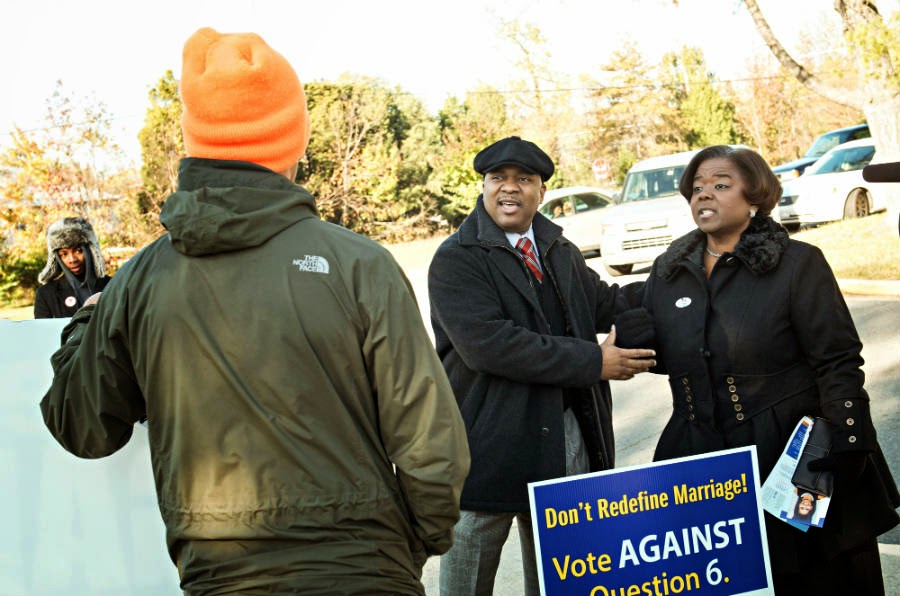 I have often voiced my frustration with black pastors who allow themselves to be manipulated by white Christofascists who hate blacks almost as much as they hate gays.  It drives me crazy that these self styled leaders of the black community seemingly know no history and are too stupid to realize that the same folks who opposed desegregation are using them to further discrimination.  As the Christian Post reports, a new PBS documentary looks at the phenomenon.  Here are highlights:

A documentary being broadcast by PBS titled, "The New Black," examines how the Christian right capitalizes on "homophobia in the black community's institutional pillar — the black church" in order to "pursue an anti-gay political agenda."

At the forefront of the conservative pushback against legalizing gay marriage in the state was the Maryland Family Alliance and the Maryland Family Council, both tied to the local congregation, Hope Christian Church led by Senior Pastor Bishop Harry R. Jackson, Jr. Jackson was a frequent conservative voice in public discussions about the marriage movement in his state.

Partial funding for the Maryland Marriage Alliance came from the National Organization for Marriage, whose "National Strategy for Winning the Marriage Battle" was revealed during a 2012 investigation by the State of Maine into the nonprofit's campaign finance activities. NOM states in confidential internal memos, all dated to 2009, that the "strategic goal of this project is to drive a wedge between gays and blacks — two key Democratic constituencies."

"Find, equip, energize and connect African American spokespeople for marriage, develop a media campaign around their objections to gay marriage as a civil right; provoke the gay marriage base into responding by denouncing these spokesmen and women as bigots," reads another memo.

Yoruba Richen, the director, producer and writer for "The New Black," has stated that she believes the fight for gay rights is "a fight for the African-American family."

"In the course of production, I realized that the issue of gay rights in the black community is in many ways a fight over the African-American family, which has been a contested space since the time of slavery," she states on the documentary's website.

"So marriage is not just about marriage for black people – it's also about how blacks have become accepted as legitimate participants in American society. The gay marriage question has forced a conversation in the black community, which is taking place in our churches, our houses, our neighborhoods and the ballot box."

Also making an appearance in "The New Black" is Anthony Charles Williams II (stage name B.Slade, formerly Tonex), an award-winning gospel recording artist who surprised many when he publicly came out as gay in 2009.

i watched it last night. it was both informative and highly moving.

what really struck me was the utter hypocrisy of a lot of those folks of faith who kept going on about "redefining the family," which i found disingenuous since redefinition of family has been part of african american culture for so long already.