The Idiocy of the GOP/Architects of the Iraq War Continues 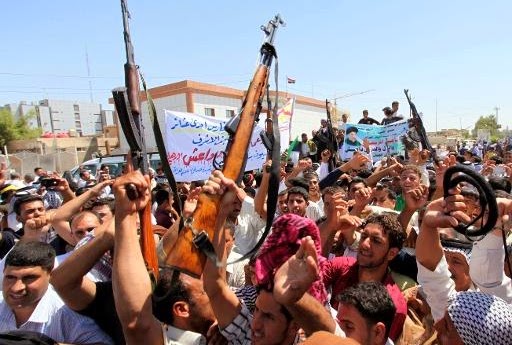 The saying goes that those who do not know history are deemed to repeat it.  Typically, the time line involved in the statement spans back for many years.   In the case of far too many in today's Republican Party and in particular among the minions of Bush/Cheney who lied to drag America into war in Iraq, their memories do not extend back even a decade ago.  It is frightening that we are hearing the same justifications for renewed military action in Iraq that led to the fiasco in the first place.  One can only think that these individuals are insane, or in the case of Dick Cheney, they want Halliburton to reap more billions in U.S. tax dollars.  A column in the New York Times puts the idiocy of the position of these people and the costs to date of their past fool's errand in perspective.  One can only wonder why anyone in the legitimate news media - which, of course does not  include Fox News - gives these people a moment of air time or news print.  Here are column highlights:

I’m flinching at a painful sense of déjà vu as we hear calls for military intervention in Iraq, as President Obama himself — taunted by critics who contend he’s weak — is said to be considering drone strikes there.


Our 2003 invasion of Iraq should be a warning that military force sometimes transforms a genuine problem into something worse. The war claimed 4,500 American lives and, according to a mortality study published in a peer-reviewed American journal, 500,000 Iraqi lives. Linda Bilmes, a Harvard expert in public finance, tells me that her latest estimate is that the total cost to the United States of the Iraq war will be $4 trillion.

That’s a $35,000 tax on the average American household. The total would be enough to ensure that all children could attend preschool in the United States, that most people with AIDS worldwide could receive treatment, and that every child worldwide could attend school — for the next 83 years. Instead, we financed a futile war that was like a Mobius strip, bringing us right back to an echo of where we started.

We might have learned some humility. Yes, the military toolbox is handy and often useful. But one of the most basic lessons of international relations is a frustrating one: There are more problems than solutions. Governments, like doctors, should weigh the principle, “First, do no harm.”
Yet Paul Bremer, the former American envoy in Iraq, argues for airstrikes and even a few boots on the ground. The Wall Street Journal’s editorial page, likewise, favors military intervention.

Perhaps more surprisingly, so does Senator Dianne Feinstein of California . . . .

The least surprising hawk is Dick Cheney, who in a Wall Street Journal op-ed article with his daughter Liz preserves an almost perfect record of being wrong. From the vice president who himself obtained every possible deferment to avoid Vietnam, who asserted “with absolute certainty” in 2002 that Saddam was making nuclear weapons, and insisted in 2005 that the Iraqi insurgency was in its “last throes,” we now have a blast at President Obama for failing to extinguish the continuing throes.


Many Sunnis in Iraq dislike ISIS, but they have learned to loathe and distrust Maliki even more. The way out of the mess in Iraq is for the government to share power with Sunnis and Kurds, accept decentralization and empower moderate Sunni tribes.

If all that happens, it may be reasonable for the United States to back a united Iraqi government by authorizing airstrikes against ISIS fighters. Without that, we simply become an accomplice to Maliki’s intransigence, assisting one party in a civil war.

Unfortunately, it looks as if Maliki is doubling down, revving up his Shiite base rather building a common front. The Iraqi government should be releasing Sunni prisoners as a good-will gesture. Instead, prisoners have been executed by police.

[T]he $4 trillion lesson from the Iraq war is that while our military capabilities are dazzling and sometimes intoxicating, they cannot be the solution to every problem.

Amen!!  As for Feinstein, I can only surmise that the woman has gone senile or is suffering from temporary insanity!
Posted by Michael-in-Norfolk at Thursday, June 19, 2014