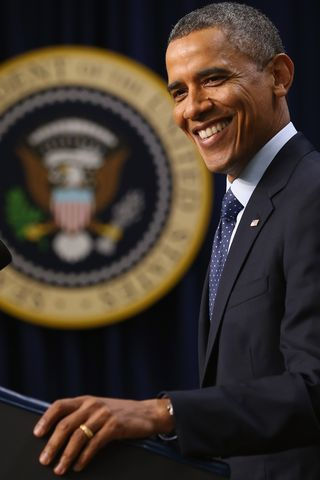 While many federal agencies and departments are now recognizing same sex marriages performed in states where such marriages are legal, new regulations backed by the Obama administration will further expand equal treatment for all married couples under the law.  It's a safe bet that this move will further prompt Christofascists to depict Obama as the Anti-Christ or as waging a war on Christians.  In reality, of course, it has always been the Christofascists who have waged a relentless war against gays and others who reject the hate and fear based religious beliefs of the self-anointed "godly folks."  Given Hampton Roads' large number of military personnel, the changes by the Department of Defense will be significant for the region.  A piece in the New York Times looks at the additional recognition to be afforded to married same sex couples.  Here are highlights:

The federal government on Friday will extend a wide range of marriage benefits to same-sex couples, making good on a promise by President Obama after the Supreme Court struck down the Defense of Marriage Act last year.


After decades of blocking gay married couples from receiving the same benefits as their heterosexual counterparts, most federal agencies will now treat married couples alike, regardless of gender. The changes in regulations across the federal government will be announced Friday.

The action is important, officials said, because of differences in how states treat same-sex marriage. Without the regulatory changes, gay couples could be blocked from receiving federal benefits in states that do not recognize their marriages. Same-sex marriage is legal in 19 states and the District of Columbia.

“In almost all instances, federal benefits and obligations for same-sex married couples will be provided, regardless of where the couple lives,” a White House official said late Thursday before the agencies’ formal announcements.

Under the changes, same-sex spouses of Defense Department employees will receive all the benefits of heterosexual husbands and wives. Federal immigration law will apply equally to gay and straight married couples. The Internal Revenue Service will recognize the marriages of all gay couples. The spouses of gay federal employees will get health insurance, life insurance and flexible spending accounts.

In addition, federal employees will be able to take leave to care for a same-sex spouse, something that has long been limited to heterosexual married couples.

The actions are the latest examples of Mr. Obama’s embrace of equality for same-sex couples following what he called his evolution on the issue.

While he was at the event, Mr. Obama announced that he had directed his staff to develop an executive order that would ban federal contractors from discriminating in hiring decisions on the basis of sexual orientation or gender identity. And he vowed to keep pressuring Congress to pass a law that would extend those protections to all workers.