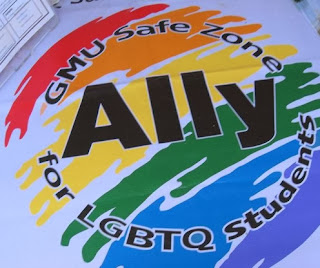 With every legitimate mental health and medical association condemning "ex-gay" reparative therapy, the states of New Jersey and California outright banning the practice for those under 18 years of age (additional states may follow suit), and Exodus International closing and admitting that few if anyone was actually "changed" by the witch doctor like "ex-gay" therapy the group promoted, hate group backed "ex-gays" are apparently getting desperate to find a way to remain even remotely legitimate.   Hence the recent move by two "ex-gay" groups to try to intimidate Virginia colleges and universities into providing "ex-gay" information to students.  One can only hope these colleges and universities - or perhaps more importantly, their liability insurance carriers - refuse to knuckle under to these threats and intimidation.    Promoting a discredited and dangerous "therapy" that is based solely on religious dogma would seem to be a liability lawsuit waiting to happen.  Again, with more and more Americans recognizing that the "choice" and "change" myths promoted by Christofascist are lies, fraudulent "ex-gay" ministries are desperate to try to change the playing field to regain a shred of legitimacy.  GayRVA looks at these efforts to intimidate public colleges and universities.  Here are highlights:

Parents and Friends of Ex-Gays & Gays (PFOX) is asking Virginia legislatures to stop funding “gay-transvestite centers at Virginia’s public universities,” claiming state funds are being used to “indocronate” youth into changing their faith.

Today’s announcement comes as a response to an undercover investigation produced last month by the ex-gay group Voice of the Voiceless which concluded that LGBTQ resource centers at Virginia state universities are discrediting the ex-gay community.

In a press release by PFOX their executive director Regina Griggs said these centers deny change is possible by refusing to accept ex-gays exists.

“Virginia taxpayers shouldn’t be forced to fund hatred and discrimination against ex-gays and people of faith,” Griggs said in the press release. “These biased and discriminatory lesbian/gay/bisexual/transgender/questioning centers hide ex-gay resources and insist that students adopt a ‘gay-only’ mentality that rejects those who have changed their orientation from gay to straight while celebrating those who have changed their gender identity.”

Ric Chollar is Associate Director for Lesbian, Gay, Bisexual, Transgender, Queer and Questioning (LGBTQ) Resources at the Northern Virginia college of George Mason University (GMU).
GMU was specifically criticized by Voice of the Voiceless when Chollar, who is also a licensed clinical social worker, told the undercover investigator to seek a Metropolitan Community Church and read, “The Lord is my Shepherd, and He Knows I’m Gay.”

“It wasn’t that I directed him to go just there,” Chollar said. “All throughout the interview I was trying to be very careful as I think all of us are in not giving advice or direction but instead presenting options and linking whatever suggestions and whatever possibilities come from the piece of himself that he is talking about.”

“The value we place is around encouraging students towards mental health, and towards happiness and towards success as students,” Chollar said about there being no evidence of ex-gay therapy being successful.

The American Physiological Association has publicly state ex-gay therapy does not work, and often is more harmful than anything else. A report was released in 2009 that detailed the results of their work.

If one does their homework, it quickly becomes clear that PFOX is funded almost solely by anti-gay hate groups and its national board of directors includes a who's who of hate merchants, some of whom make a plush living peddling lies.  In my opinion, "ex-gay" therapy needs to be banned nationwide.  In my view, the nastiest whore has more integrity than the folks at PFOX and Voice of the Voiceless.  If students are conflicted by their sexual orientation, they need to get legitimate therapy and over come the sick religious brainwashing that the Christofascists and their minions disseminate.
This situation also underscores why Mark Herring must be elected as Attorney General.  If his religious extremist opponent, Mark Obenshain is elected, Obenshain would likely pressure Virginia colleges and university to provide fraudulent "ex-gay" materials to students.  Countless young lives could be damaged as a consequence.

well, if they're "ex-gays," they should just call themselves, "straights."