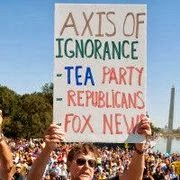 Part of me takes delicious pleasure in watching the Frankenstein monster like Christofascist/Tea Party base of the Republican Party to continue to turn on the so-called GOP establishment and push the party closer to long term extinction.  When I left the GOP years ago over the rise of the Christofascists within the party and its inability to honor the concept of separation of church and state I predicted that long term the GOP was committing suicide.  With the advent of the Tea Party (which I see largely as the unpopular Christian Right hiding under a different name), things have only become worse as these elements of the GOP become increasingly open about their opposition to modernity, their blatant racism, their religious extremism, and their contempt and hatred towards anyone they deem "other."  Now, in the wake of the government shutdown debacle, these same lunatics are trying to target the few sane Republicans left.  If they succeed, it will only hasten the GOP's decline.  The only question will be how much additional damage will be done to America before the GOP becomes a small, permanent minority party.  A piece in The Daily Beast looks at the quest of the crazies to eliminate moderate - and sane - members of the GOP.  Here are excerpts:

Republicans in the House of Representatives have such low approval ratings, according to recent polls, that a Democratic takeover looks possible. But before Republicans can defend their majority, they first must stave off a slew of primary challengers who are targeting incumbent members of Congress.


The new spate of primaries mostly target those Republicans who failed to toe the Tea Party line during the recent budget standoff, voting to open up the government and raise the debt ceiling. But the challenges are by no means limited to the crew of moderates. Even House Speaker John Boehner is not immune.

On the day the government shutdown began, J.D. Winteregg, a high school French teacher and founder of a group called The Ohio Accountability Project, announced a primary run against Boehner. The campaign will, at the very least, give a place for grassroots Republicans to vent their outrage against the GOP leadership while waiting for polls to open. In an interview, Winteregg said his campaign sends a message “that no one is safe.” And momentum for his run, he said, has been growing in the wake of Boehner’s budget capitulation in Washington.

In North Carolina, Taylor Griffin, a former aide to President George W. Bush, also announced his bid for Congress just as the government shut down. Griffin is running against Rep. Walter Jones, an antiwar former Democrat who was ranked by National Journal as the House’s most liberal Republican in 2011. Jones, Griffin conceded, has been pretty good on fiscal issues, but the challenger said the fiscal skirmishes left him “frustrated with how broken things had become, and I thought my congressman was part of the problem.”

It remains to be seen whether these races will bring out the full firepower of the conservative financial and grassroots army. Often outsiders have bested incumbent and establishment picks only after groups such as FreedomWorks, Heritage Action, Club for Growth, and the Tea Party Express have gotten involved in a big way.

The GOP establishment stupidly embraced these nutcases in the past out of cynical expediency.  Now, the monster has turned on them.  I am enjoying my predictions come to pass.
Posted by Michael-in-Norfolk at Wednesday, October 23, 2013