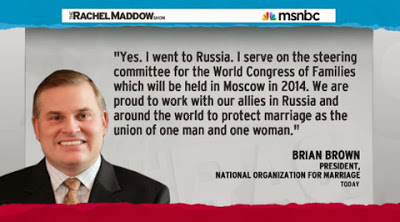 Faced with being on the wrong side of history here in America where the acceptance of gays and gay marriage is growing, American Christofascist organizations are exporting their lies and anti-gay bigotry overseas, both to Africa and in areas of the former Soviet Union.  Some, like Brian Brown of the National Organization for marriage - a hate group in all but formal designation - are even boasting about their role in Russia's extreme anti-gay laws.  Besides their quest to impose their fear and hate based religious beliefs on all, I suspect that these hate merchants have another motive as well: money.  With their anti-gay agenda steadily losing in America, they need new flocks of sheeple to shake down so they can continue to live the good life.  Joe Jervis looks at NOM's involvement in the spread of hatred overseas.  Here are excerpts:

As we know, hate group leaders Brian Brown and Scott Lively are conspirators in Russia's pogrom against its own LGBT citizens. But the virulently anti-gay World Congress Of Families didn't only meet in Moscow last week. Via press release today:

On October 13, the delegation met in Kiev with representatives of parents groups from all over the country. The meeting was organized by Alexandar Skvortsov, co-chairman of the umbrella group, All Ukrainian Parents Committee. The Ukrainian leaders expressed concern about the pressure brought to bear on their nation to accede to the homosexual agenda (including "gay marriage") as a condition for membership in the European Union. They also noted the moral decline in society reflected in pornography (of which the Ukraine is one of the leaders internationally) and prostitution. They complained about sexual indoctrination in the schools -- in the guise of teaching sex education -- and showed the WCF leaders a booklet used for this purpose that's graphic in both content and illustrations. The same WCF leaders were in Belgrade on September 28, for a rally and family march, including as many as 10,000 participants, according to an AP report.

NOT by coincidence, on the very day that WCF was in Belgrade, city leaders abruptly banned that day's planned gay pride parade, "citing security concerns over threats of violence by the neo-Nazi groups who battled hundreds of riot police at Belgrade Pride 2010."

Conservative Christianity is a virulent poison that needs to be eradicated from  politics and polite society.  Hate, division, violence and brutality are too often its principal fruits.  Folks like Brown are not nice people and need to become pariahs.

Posted by Michael-in-Norfolk at Wednesday, October 23, 2013