George Will Endorses Sarvis Over Cuccinelli 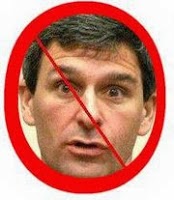 You know the Republican Party is in deep trouble when they typically right wing George Will endorses a libertarian candidate over a Republican standard bearer.  Yet that is precisely what Will does in a column in the Washington Post.  True, Will holds no love for Democrat Terry McAuliffe, but the fact that he cannot support Ken Cuccinelli speaks volumes about just how extreme - frightening might be a better word - Cuccinelli and his agenda are in reality.  Like many, I feel that neither major party candidate is ideal, but in the last analysis, one sometimes votes for the lesser evil.  Hence my support (and the support of most leading newspapers in Virginia) for Terry McAuliffe.  Apparently, Will cannot hold his nose and vote for McAuliffe, so he is encouraging a vote for Robert Sarvis, the Libertarian Party candidate for governor of Virginia.  Here are column excerpts:


Equanimity is his [Robert Sarvis'] default position and almost his political platform: Why be agitated when your frenzied adversaries are splendidly making your case about the poverty of standard political choices?

In Sarvis, the man and the moment have met. He is running at a time of maximum distrust of established institutions, including the two major parties. He has little money, but McAuliffe and Cuccinelli have spent millions of dollars on broadcast ads making each other repulsive to many Virginians, who surely feel as Will Rogers did: “You got to admit that each party is worse than the other.” Furthermore, the partial shutdown of the government especially annoyed Sarvis’s state, which has the nation’s second highest per-capita federal spending (Alaska is first) — Northern Virginia is a dormitory for federal workers and southern Virginia’s military installations include the world’s largest naval complex.

During an intermission in the telecast of a notably disagreeable McAuliffe-Cuccinelli debate, viewers heard from their television sets a woman’s voice asking, “Can’t vote for these guys?” Then Sarvis’s voice:  “Like you, I can’t vote for Ken Cuccinelli’s narrow-minded social agenda. I want a Virginia that’s open-minded and welcoming to all. And like you, I don’t want Terry McAuliffe’s cronyism either, where government picks winners and losers. Join me, and together we can build a Virginia that’s open-minded and open for business.”

Cuccinelli is a stern social conservative, an opponent of, among other things, gay marriage. Marriage equality interests Sarvis (whose mother is Chinese) because his wife is African American, so his marriage would have been illegal in Virginia before the exquisitely titled 1967 U.S. Supreme Court decision Loving v. Virginia .

Sarvis, who is 37 and may look that old in a decade or so, graduated from Harvard with a mathematics degree, earned a law degree from New York University and clerked in Mississippi for a judge on the 5th U.S. Circuit Court of Appeals. After a spell as a mathematics graduate student at Berkeley, Sarvis worked for a San Francisco tech startup, then earned a master’s degree in economics at George Mason University. In 2011, he ran as a Republican against the state Senate majority leader, a 31-year incumbent. Outspent 72-to-1, Sarvis got 36 percent of the vote.

He must scrounge for media attention because he fares poorly in polls that reinforce the judgment that he is not newsworthy. But he is.

Third-party candidacies are said to be like bees — they sting, then die. Still, Sarvis is enabling voters to register dissatisfaction with the prevailing political duopoly. Markets are information-generating mechanisms, and Virginia’s political market is sending, through Sarvis, signals to the two durable parties.