Cuccinelli: No Conflict for Him to Preside Over Election in Which He Is a Candidate 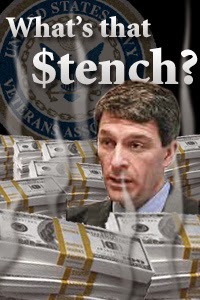 Sadly, we have already seen examples of Ken Cuccinelli's failure to avoid blatant conflict of interest while he has occupied the office of Virginia Attorney General: bribes gifts from Jonnie R. Williams, CEO of Star Scientific and bribes campaign contributions from Consol Energy which just happened to receive improper legal assistance from Cuccinelli's office, etc.  But now, Cuccinelli's batshitery/arrogance has reached unbelievable levels.  When requested to recuse himself/his office from presiding over legal disputes and issues arising from the 2013 gubernatorial contest in which Cuccinelli is a candidate, Cuccinelli has formally stated that "there is no conflict of interest."  In what universe?   What freaking planet is this man from?   The Richmond Times Dispatch looks at the insanity.  Here are excerpts:


This summer, state Sen. John S. Edwards, D-Roanoke, asked Virginia Attorney General Ken Cuccinelli whether it is a conflict of interest for Cuccinelli and his office to preside over an election in which he is a candidate.  He wanted to know whether that conflict required Cuccinelli to recuse his office from prosecuting any violations of election law.

On Friday, Edwards received his answer -- no.

"...There is no legal or ethical requirement that a sitting Attorney General who is on the ballot for an election disqualify himself or his Office from performing all of the Office's statutory responsiblities."
Cuccinelli wrote in a five-page legal opinion, posted to the Attorney General's website today.

"It is further my opinion that any potential recusal of that office must be determined on a case-by-case basis."

Edwards' request was an extension of a position maintained by Democrats in the campaign -- that by remaining in office while running for governor, Cuccinelli compromised not only his ability to serve but invited conflicts between his official responsibilities and his political interests.

The previous six attorneys general who ran for governor of Virginia all resigned their office before their terms expired to seek the Executive Mansion. Cuccinelli has said he would stay in office to fulfill his promise to voters to serve his full term.

Given Cuccinelli's past corruption and disregard for conflicts of interest, I for one do not feel the least bit comfortable knowing that Cuccinelli will likely try to manipulate the election results if the polls  bear out and he goes down in flames.  Cuccinelli is unfit for any elected office!