The Tea Party is the Problem with America 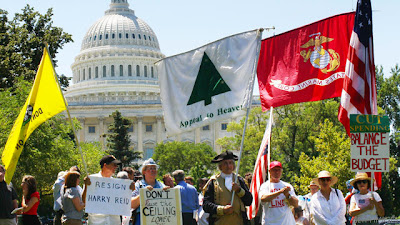 It's no secret that I have little regard for the so-called Tea Party which in many ways is a disguise for the Christian Right which needed to hide under a new label given the negative image the Christofascists with many Americans.  The embrace of ignorance, racism, homophobia, reaction against modernity and xenophobia displayed by the Tea Party track nearly identically with the mindset of the Christofascists and some 85% of Tea Party members identify as "conservative Christians."   The American public and the news media need to recognize this reality and not allow this toxic element of the public to get away with the deceptive charade.  As a piece in The Daily Beast notes, partisanship is not the problem in Washington.  It's the Tea Party/Christofascists.  Here are column excerpts:

So now that our government is open and able to pay its bills, what soon-to-be-forgotten lessons have we learned from this sorry fiasco?

Perhaps most important is the reminder that political temper tantrums in Washington exact a toll that goes far beyond unfavorable headlines and worse-than-dog-poo poll numbers. This decision hurt people. Some families couldn’t pay their bills. Others had nowhere safe to send their children while they worked. Poor women lost vouchers that helped buy food and formula for their newborns. Cancer treatments were put on hold for patients who didn’t have much time to waste.

All told, the shutdown and flirtation with default cost America north of $20 billion. The countries that weren’t busy mocking us were frightened by our behavior, wondering if the world’s wealthiest nation would become the world’s deadbeat nation, taking everyone else down with us in a global collapse worse than 2008.

And for what? For what purpose was this pain and humiliation inflicted upon the American people?

Rep. Marlin Stutzman from Indiana. Do you have an answer?   “We’re not going to be disrespected. We have to get something out of this. And I don’t know what that even is.”

Which brings me to the second shutdown lesson. As a country, we may never get a more revealing, disturbing look at the true source of Washington’s dysfunction than we did over the last few weeks. Together, we endured a 21-hour non-filibuster speech from White Castle enthusiast Ted Cruz that was so devoid of self-awareness I’m not even sure he knew he was giving it. We saw Sarah Palin come all the way back from the small town of Irrelevancy, Alaska, to lead the charge against an open-air memorial that was blocked by a 3-foot barricade, while a few assholes waved Confederate flags outside the White House and reminded each other that Obama’s a Muslim, just for good measure.

All this, despite the fact that the Tea Party represents the views of a small, ever-shrinking fraction of Americans. . . . And yet, somehow, this small minority of Tea Party House members, who represent less than one half of one legislative body in one branch of government, has been given enormous influence over the national agenda—a situation without precedent in American political history. It’s insanity.

Boehner was, in his own words, “overrun” by the Tea Party during the shutdown, and so long as he and other Republicans fear challenges from the fringe more than the frustrations of the majority, nothing will get done. And we will find ourselves in the same predicament again and again, regardless of who is elected president or speaker or majority leader.

[W]e cannot allow the Tea Party to continue holding the country hostage over its kamikaze mission to destroy government. The vast majority of Americans reject that mission, and we’re not about to sacrifice ourselves or our democracy as collateral damage. It’s time for all of us to get together and fight the crazy.

I may sound like a broken record, but these people - the Tea Party/Christofascists - need to become political and social pariahs and made so toxic that no decent, responsible legislator will give them the time of day.  Hate, racism, bigotry, religious extremism and selfishness are not cherished American values, yet these are the cherished values of the Tea Party/Christofascists.   They are not nice and decent people and the sooner the rest of us understand this and act accordingly, the better off America will be.
.