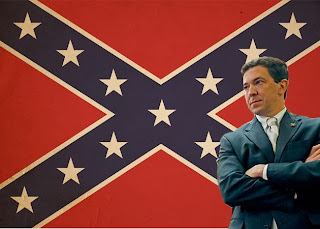 Only in today's Republican Party and in the Deep South will one find a candidate for the United States Senate appearing at a conference of Neo-Confederates who advocate secession.  Welcome to GOP dysfunction writ large.   Seemingly, there is no limit to what is acceptable in today's GOP.  The crazier and more extreme, the more welcome batshitery is within the party base.  All of which, in my view relates back to the rise of the Christofascists in the Republican Party.  Only the broad influence of those who deny science, deny objective reality and oppose all forms of modernity can explain Chris McDaniel who is in the words of Mother Jones, taking the "GOP Civil War" to a new level.  Here are highlights from the Mother Jones piece:


Chris McDaniel is taking the "GOP Civil War" to a new level. Two months ago, the tea party-backed Mississippi Senate candidate addressed a neo-Confederate conference and costume ball hosted by a group that promotes the work of present-day secessionists and contends the wrong side won the "war of southern independence." Other speakers at the event included a historian who believes Lincoln was a Marxist and Ryan Walters, a PhD candidate who worked on McDaniel's first political campaign and wrote recently that the "controversy" over President Barack Obama's birth certificate "hasn't really been solved."

McDaniel, a state senator, is challenging incumbent Republican Sen. Thad Cochran in next summer's GOP Senate primary. After announcing his run last week, McDaniel quickly picked up endorsements from the Club for Growth and the Senate Conservatives Fund, a political action committee founded by former Sen. Jim DeMint (R-S.C.), a prominent backer of the tea party. Both groups are key players in the internal GOP battle between establishment-minded Republicans and tea party insurgents and are backing right-wing challenges to incumbent Republicans whom they deem insufficiently conservative.


With their endorsements of McDaniel, the Senate Conservatives Fund and the Club for Growth have shown just how far they are willing to go in terms of embracing the far right to prosecute their war for the soul of the party. In August, McDaniel addressed a neo-Confederate conference in Laurel, Miss., near his hometown of Ellisville. A local chapter of the Sons of Confederate Veterans (SCV), the Jones County Rosin Heels, hosted the two-day event, which the group described in invitations as a "Southern Heritage Conference" for "politically incorrect folks."

The Rosin Heels does more than regret the outcome of the Civil War. Its monthly newsletter routinely features articles and essays advocating for present-day secession. Its August newsletter highlighted the seven-year-old "Burlington Declaration" from the First North American Secession Convention, which stated that the right of secession was a "[truth] of natural law and the human experience."  . . . .A note from the editor stated that "we are living in the times that Jefferson Davis predicted would one day come," in which the conflicts that presaged the Civil War would flare up again. The June issue compared Obama's policies to the ravages of Reconstruction: "Our people have had to put up with for the last FIFTEEN DECADES!!!"


McDaniel was joined at the Southern Heritage Conference by Al Benson, a historian from Louisiana, who talked about his book Red Republicans & Lincoln Marxists, which speculates that Lincoln's actions during the Civil War were influenced by the writings of Karl Marx.

Hobnobbing with birthers and Lost Causers may not be an impediment for McDaniel as he tries to dethrone Cochran—he is, after all, in Mississippi. According a 2011 survey from Public Policy Polling, only 47 percent of Mississippians—and 21 percent of Mississippi Republicans—were satisfied with the outcome of the Civil War.


Again, only in today's insane GOP would folks like McDaniel be taken seriously.
Posted by Michael-in-Norfolk at Thursday, October 24, 2013

I would be more than willing to let Mississippi and Alabama secede, stopping the flow of federal tax dollars into them and ensuring the US citizenship of anyone who chose to leave.