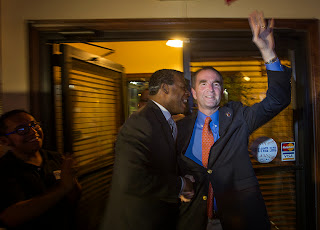 In yet another sign that perhaps the moribund Daily Press is waking up to the fact that being a far right rag is not conducive to its continued survival, the Daily Press has endorsed Ralph Northam for Lt. Governor of Virginia.  While it would be hard for anyone remotely sane to endorse the GOP candidate, "Bishop" E.W. Jackson - I put bishop in quotes since Jackson formed his own tiny church and gave himself the title of bishop - more insane things have appeared on the Daily Press editorial page in the past.  Thankfully, the editorial board saw that Jackson is an extremist and, arguably, unfit for any elected office while Northam is an educated, rational man with a track record of problem solving.   Here are excerpts from the endorsement:

Ralph Northam has served in the state Senate since 2008. This year he has earned our endorsement for lieutenant governor, the position that serves as the president of that house of the General Assembly.

Mr. Northam, the Democratic nominee, impressed us as a plainspoken man who approaches issues in a thoughtful, even-handed manner. He has the right temperament to work with the governor and lead the state senate as a negotiator in search of bipartisan compromises.

We extended several invitations for Republican nominee E.W. Jackson to meet with us, but his campaign never arranged a time. It is a policy of the Daily Press Editorial Board that we do not consider endorsing local or statewide candidates without discussing their positions with them.

In that way, Mr. Jackson made our decision easy, by leaving us no choice but to endorse Mr. Northam. But had we been able to meet with Mr. Jackson, he would have had a hard time winning our confidence. Mr. Jackson, a bishop from Chesapeake who has never held elective office, has drawn considerable attention for incendiary comments about those with whom he disagrees.

Many of these quotes come from sermons rather than stump speeches, such as last month when he told a church congregation in Northern Virginia that people who don't follow Jesus Christ "are engaged in some sort of false religion." Mr. Jackson has tried to say that his words from the pulpit should be seen as separate from the policies he stands for as a candidate. But it has to raise red flags when a candidate for statewide political office says, in any context, that homosexuals are "very sick people psychologically, mentally and emotionally." When he refers to Democrats as "the anti-God party," it does not fill us with confidence in his ability to reach across the aisle for the sort of productive negotiations that are critical to efficient government.

In recent years, our General Assembly has grown increasingly distracted by divisive social issues, often on women's health. The result has been indefensible legislation mandating needless and overly invasive ultrasounds and specifically targeting clinics that provide abortions. To this mix, we cannot afford to add a lieutenant governor who said, in a scripted and professionally filmed video: "Planned Parenthood has been far more lethal to black lives than the KKK ever was. And the Democrat Party and their black civil rights allies are partners in this genocide."

Mr. Northam, an Army veteran who served in Desert Storm, favors sensible gun laws that balance public safety with the Second Amendment rights of private citizens – though we take issue with him for supporting the legislation that sealed the public records on concealed carry license. He progressive views, tempered by his conservative upbringing on the Eastern Shore, make him a centrist. A doctor who specializes in pediatric neurology, he brings a distinctive perspective on issues such as health care, Medicaid and the relationship between doctor and patient.

Mr. Northam was one of the strongest supporters of Gov. Bob McDonnell's $6 billion transportation deal, a significant piece of legislation that will provide funds for badly needed repairs and expansions for this region's interstates and tunnels. In discussing jobs and the state's economy, he stresses sensible measures addressing transportation, health care and education aimed at making Virginia the most appealing place possible for businesses.

These two candidates for lieutenant governor offer a stark contrast in personalities and in approaches to governing.

Mr. Northam chooses his words carefully and addresses issues in measured tones. He has a diplomatic disposition that would serve him well as the president of a state Senate that has been too polarized in recent years.  For these reasons, we endorse Ralph Northam for lieutenant governor.