The Self-Inflicted Implosion of the GOP Brand 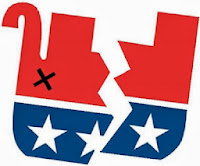 The post mortem of the aftermath of the Tea Party/Christofascist fueled Republican Party government shutdown continues and none of the disclosures should be deemed good news by sane Republicans, admittedly a dying breed.  And what does the Republican Party and the GOP base have to show for such reckless insanity?    Nothing.  Or at least nothing positive.  So what caused this nihilism?  Andrew Sullivan sums it up well:

The fusion of politics and religion – most prominently the fusion of the evangelical movement and the Republican party – has been one of the most damaging developments in recent American history. It has made Republicanism not the creed of realists, pragmatists and compromise but of fundamentalists – on social and foreign policy, and even fiscal matters. And once maintaining inerrant doctrine becomes more important than, you know, governing a complicated, divided society, you end up with the extremism we saw in the debt ceiling crisis. When doctrine matters more than actually doing anything practical you end up with Cruz cray-cray.

Thankfully, most Americans seem to have been paying attention and the GOP now enjoys record breaking unfavorable ratings with many diverse demographic segments of American Society.   A Piece in the Washington Post reviews the extent of the damage.  Here are highlights (check out the piece for an amazing graphic):

Polling released this week by the Washington Post and ABC News found the GOP’s unfavorability ratings among Americans at an all-time high of 63 percent.

But a closer look at the numbers reveals that this has been accompanied by a massive collapse in 2013 of the GOP brand among core constituencies important in midterm elections: Independents, women, and seniors. The crack Post polling team has produced a new chart demonstrating that in the last year — since just before the 2012 election – there’s been a truly astonishing spike in the GOP’s unfavorable ratings among these core groups.

[T]he GOP’s unfavorable ratings have jumped 19 points among seniors, to 65 percent; 17 points among independents, to 67 percent; and 10 points among women, to 63 percent. Those are all key constituencies in midterm elections.

Observers believe that over the long term, the GOP will have to do a better job winning over college educated whites, who are an increasingly important constituency, along with young voters and minorities, in the Democratic coalition of the future. (Ron Brownstein has dubbed these groups the “coalition of the ascendant,” arguing they are increasingly important in statewide races, not just national ones.)

Among white collar whites, the GOP’s unfavorability rating has shot up by a startling 21 points, to 70 percent. Among college educated women – who may be more critical to the Dem coalition than college educated men – the spike in GOP unfavorability has been somewhat more dramatic than among women overall, jumping 15 points, to 74 percent. If this trend continues, it could fuel future Dem gains among women.

There is still plenty of time for the current political atmosphere to change, of course. But the possibility of more GOP crises and chaos governing in 2014 – which could reinforce current public impressions of the GOP – remains very real. “The Republican brand is already so damaged,” Duffy says. ”What should be a pretty successful cycle for them is deteriorating by the week.”

The sweet irony of all of this is that all of the GOP's decline in favorability has been self-inflicted thanks to the Tea Party/Christofascist elements of the GOP.