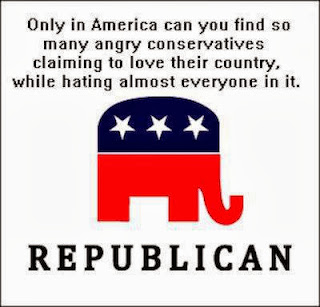 One of the biggest examples to my mind of Republican and Christofasist/Tea Party hypocrisy revolves around the effort to kill Medicaid expansion and the Affordable Health Care Act.  These people blather incessantly about upholding Christian values and congratulate themselves almost daily about the piety and religiosity even as they seek to deprive the health care access to millions of the poor and unfortunate.    The Gospel directive to tend the sick means nothing to these foul modern day Pharisees.  To them, the poor - especially if they are not white - are trash to be thrown on the garbage heap.  A column in the New York Times looks at the disingenuous excuses being up forward by the  Republicans and Christofasist/Tea Party crowd to kill health care reform.  Here are highlights:

The real threat remains the effort of conservative groups to sabotage reform, especially by blocking the expansion of Medicaid. This effort relies heavily on lobbying, lavishly bankrolled by the usual suspects, including the omnipresent Koch brothers. But it’s not just money: the right has also rolled out some really lousy arguments.


And I don’t just mean lousy as in “bad”; I also mean it in the original sense, “infested with lice.”
Before I get there, a word about something that, as far as we can tell, isn’t happening. Remember “rate shock”? A few months ago it was all the rage in right-wing circles, with supposed experts claiming that Americans were about to face huge premium increases.

It quickly became clear, however, that what these alleged experts were doing was comparing apples and oranges — and as Ezra Klein of The Washington Post pointed out, oranges that, in many cases, you can’t even buy. Specifically, they were comparing the premiums young, healthy men were paying before reform with the premiums everyone — including those who previously couldn’t get insurance because of pre-existing conditions — will pay under the new system. Oh, and they also weren’t taking into account the subsidies many Americans will receive, reducing their costs.

Now, about those lousy Medicaid arguments: Last year’s Supreme Court decision upholding the Affordable Care Act did strike down one provision, the one that would have forced all states to accept an expansion of Medicaid, the already-existing program of health insurance for the poor. States are now free to reject that expansion. Yet how can states justify turning down a federal offer to insure thousands of their citizens, one that would cost them nothing in the first year and only trivial amounts later? Sheer spite — the desire to sabotage anything with President Obama’s name on it — is the real reason, but doesn’t sound too good. So they need intellectual cover.

Enter the same experts, more or less, who warned about rate shock, to declare that Medicaid actually hurts its recipients. Their evidence? Medicaid patients tend to be sicker than the uninsured, and slower to recover from surgery.

The application to Medicaid should be obvious. Sick people are likely to have low incomes; more generally, low-income Americans who qualify for Medicaid just tend in general to have poor health. So pointing to a correlation between Medicaid and poor health as evidence that Medicaid actually hurts its recipients is as foolish as claiming that lice make you healthy. It is, as I said, a lousy argument.

And the reliance on such arguments is itself deeply revealing, because it illustrates the right’s intellectual decline. I mean, this is the best argument their so-called experts can come up with for their policy priorities?

Meanwhile, many states are still planning to reject the Medicaid expansion, denying essential health care to millions of needy Americans. And they have no good excuse for this act of cruelty.