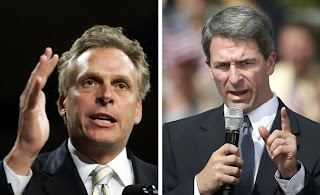 Things are already shrill and desperate in the Ken Cuccinelli campaign.  The results of a new Rassmuseen poll - and Rassmussen typically leans pro-Republican - will only make the hysteria worse.  Rassmussen's latest numbers paint a dire picture for Cuccinelli who is down 17% compared to Terry McAuliffe.  One can only wonder whether or not (i) Cuccinelli's Tea Party ties are helping to drag him down even further given the public disgust with the national Republican Party over the federal government shutdown, or (ii) his effort to energize the Christofascist/Tea Party base of the GOP that nominated him in the first place is backfiring and driving away yet more moderates and independents.  Here are highlights from Rassmussen:

Democrat Terry McAuliffe has jumped to a 17-point lead over Republican Ken Cuccinelli in the Virginia gubernatorial race following the federal government shutdown that hit Northern Virginia hard and Hillary Clinton’s weekend visit to the state.

The latest Rasmussen Reports telephone survey of Likely Virginia Voters finds McAuliffe with 50% support to Cuccinelli’s 33%. Libertarian candidate Robert Sarvis is a distant third with eight percent (8%) of the vote. Three percent (3%) like some other candidate, while five percent (5%) remain undecided.

This represents a huge negative shift from Cuccinelli from Rassmussen's September 25, 2013 figures that showed a 44% to 38% spread.  Obviously, McAuliffe's growing lead comes not only from former undecideds, but  also from those previously inclined to vote for Cuccinelli.

Democrats cannot get complacent and we need a maximum turn out to hopefully crush the entire GOP statewide ticket.  I hope that Cuccinelli and "Bishop" Jackson will serve to drag the thoroughly dishonest Mark Obenshain down with them.   We cannot lose sight on the fact that this year's GOP ticket was hand picked by The Family Foundation and its allies and it is crucial that their ticket of extremists be thoroughly repudiated so that The Family Foundation becomes radioactive even within the GOP in future elections.   Being endorsed by or appearing at a TFF function needs to become the kiss of death politically.

Posted by Michael-in-Norfolk at Tuesday, October 22, 2013