Why Republicans Are Losing the Virginia Governor's Race 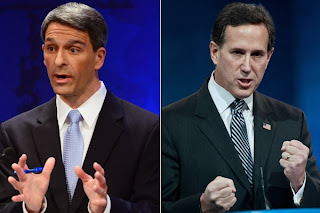 I've continued to argue that the main reason Ken Cuccinelli seems to be headed towards defeat in the Virginia gubernatorial elections in a week and a half is because - besides being clinically mentally ill in my opinion - Cuccinelli is far to extreme on so-called social issues and has no real plan to fix Virginia's broken transportation system or create new jobs other than perhaps low paying call center jobs.  Unknown apparently to Cuccinelli is the fact that unlike the folks at The Family Foundation and within the U.S. Catholic Conference of Bishops, Virginians are not obsessed with re-criminalizing homosexuality, banning contraception, restricting sex to the "missionary position, and diverting taxpayer dollars to support religious schools.  A piece in Rolling Stone echo's my sentiments and slams Cuccinelli for bringing the equally insane Rick Santorum to Virginia for his last ditch effort to energize voters.  Here are story highlights:

For many Republican politicians, the chaos and bad blood that resulted from the recent Tea Party government shutdown will be a long-forgotten memory by the next time their constituents go to the ballot box. But for Virginia Republican gubernatorial candidate Ken Cuccinelli, judgment day is just two weeks away. To overcome the public relations disaster of his party's recent hostile takeover of the federal branch – as well as his own lagging polling – the state's attorney general and wannabe-governor is going to have to bring out some big guns in the final days of the campaign. His secret weapon? Santorum.

Yes, with a nearly double-digit deficit and a 25-point gender gap, Team Cuccinelli has decided the best way to close in on Democratic opponent Terry McAuliffe is to have former Pennsylvania senator, failed presidential candidate and rabid "traditional family values" stalwart Rick Santorum ride into town for a get-out-the-vote crusade. Santorum is joining Christian conservative luminaries like the Duggars – the famous Quiverfull family and reality television stars, who also enjoy discussing the evils of birth control and comparing abortion to the Nazi Holocaust.

It's also completely the wrong way to play the last weeks of an already faltering campaign, especially after the GOP disaster that was the recent government shutdown and attempt to defund Obamacare.

Instead of following the example of Christie or learning from the upset in Florida, Cuccinelli appears determined to double down on the same far right, Christian conservative extremism that put the country into financial jeopardy just a week ago.  He stomped with Tea Party superstar Sen. Ted Cruz while Congress was still in a deadlock, and appeared with Fox News commentator and former Arkansas Governor Mike Huckabee, who commended Cuccinelli for his leadership in suing to have Obamacare declared unconstitutional.

In fact, the Cuccinelli campaign has moved so far to the right at this point that the Richmond Times-Dispatch, a mostly reliable Republican endorsement machine prior to election day, threw up its hands and refused to endorse any candidate in the race at all.  Their reason? Cucinelli's extreme stance on social issues makes him unelectable.


While the newest additions to the campaign trail are unlikely to win over any moderate Virginia voters – and they definitely won't eliminate Cuccinelli's massive deficit among women – the GOP candidate is likely hoping that bringing in the best and brightest of the Tea Party will convince his party's most extreme fringe to show up at the polls in droves.  It's a risky gamble, even more so after the massive disaster that was the government shutdown.

If Cuccinelli's strategy does work, however, expect this to be the first battle of the 2014 culture wars. And be sure to stock up on birth control while you can still get it.

I continue to stand by my view that Cuccinelli - and Santorum too, for that matter - is a self-loathing closet case who is obsessed with regulating everyone else's sex lives because he is so twisted when it comes to dealing with his own sexual orientation.   No one in good mental health and comfortable with who they are is this obsessed with other people's sex lives and homosexuality. Message to Ken: fathering lots of children doesn't make you straight.