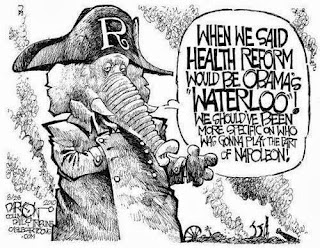 One of the favorite memes currently in Republican circles and, of course, on Fox News is that the Affordable Health Care Act is forcing employers to reduce hours for employees and make them into part time employees in order to avoid having to pick up health care insurance costs under the AHCA employer mandate.  While it is true that a small number of employers have done this, the reality is that they are using the AHCA as a smoke screen to cover what their Scrooge like management mentality had caused them to undertake in any event.  The real truth is that the AHCA is NOT creating a part time employment economy no matter how many times dishonest - can we say the word lying? - Republicans claim otherwise.   A piece in Think Progress looks at the real data.  Here are highlights:

Politicians and media figures opposed to Obamacare regularly insist that the health law is creating a part-time economy. But independent analyses and monthly employment data reveal that claim to be false.

The monthly jobs report that was released on Tuesday found that the U.S. economy had added 148,000 jobs in September and that the national unemployment rate fell to 7.2 percent. And as University of Michigan economics professor Justin Wolfers pointed out on Twitter, the report also found that the economy has been adding full time employment while actually shedding part-time jobs.

In fact, full time employment rose by over 1.6 million between September 2012 and September 2013. The number of people saying they worked a part-time job for economic reasons — such as part-time work being the only kind available — fell by nearly 700,000 in that same time period. Michael R. Strain, a resident scholar at the conservative American Enterprise Institute, tweeted out the trend in graph form with the caption, “Not much evidence of Obamacare’s part-time America here.”

Indeed, if the Affordable Care Act really were forcing businesses to cut back to more part-time workers, you would expect to see the exact opposite trend.

That isn’t to say part-time work hasn’t seen a rise during certain points of the recession. As Ben Casselman of the Wall Street Journal points out, “[p]art-time employment fell in late 2012, then rebounded in early 2013.” But now part-time employment has dropped for two consecutive months, leading Casselman to conclude that “even if the upward trend resumes, it’s doubtful that the health law is to blame.”

The hard numbers confirm earlier studies showing that very few employers have actually cut workers’ hours because of the health law. In fact, a September survey of chief financial officers found that American companies actually intend to increase their ranks of full-time workers by nearly two percent over the next 12 months, even as Obamcare’s mandate that large companies provide basic health benefits to their full-time employees goes into effect.

Almost all politicians tend to stretch the truth.  But here, the data shows that the GOP and its pundit allies aren't simply stretching the truth.  They are lying.  And as noted before, the dishonesty of the GOP has increased in direct correlation to the rise of the Christofascists within the party.  It's yet another example of the fact that no one lies more than the "godly Christian" crowd.
Posted by Michael-in-Norfolk at Tuesday, October 22, 2013