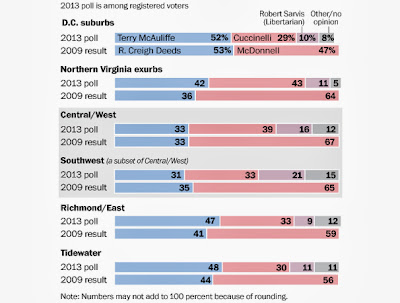 I have written a number of times about the improper legal assistance given to energy companies by Ken Cuccinelli's office against Virginia landowners fighting to receive gas royalty payments.  The Virginia Inspector General's office recently found the legal assistance to have been improper, much of it being given long after the Attorney General's office had any legitimate continuing involvement in the litigation.  Cuccinelli has claimed that he knew nothing about the improper actions of his Assistant Attorney General, Sharon Pidgeon.  As noted before, I find Cuccinelli's claimed ignorance unbelievable.  Especially since one of the energy company's parent entities had given $111,000 to Cuccinelli's campaign.  As the Washington Post reports, many in Southwest Virginia seem to likewise believe that Cuccinelli is lying.  Here are article highlights:

WISE, Va. — Amid the struggling businesses and flattened mountaintops strip-mined decades ago, antipathy toward Democrats and what’s known in this region as their “war on coal” is stronger than just about anywhere else in the country.

That has translated naturally into broad opposition to Terry McAuliffe, the Democratic candidate for governor this year. But across the coal fields of far-southwest Virginia, something unusual is also happening: Voters don’t like the Republican candidate, Attorney General Ken Cuccinelli II, much better.

Cuccinelli’s struggles seem to stem largely from a complex legal case that pits big coal companies against local property owners over the extraction of gas from Virginia land. A lawyer in Cuccinelli’s office intervened on behalf of the companies, and McAuliffe has seized on that to cast the Republican as something other than the defender-of-the-little-guy he has claimed to be throughout this year’s contentious campaign.

Resulting polls, which show McAuliffe and Cuccinelli each capturing well under 50 percent of likely voters’ support in southwest Virginia, reveal a deep vein of economic pain running through a region that presents a study in contrast to the relative prosperity and employment levels of Northern Virginia.

But these voters’ easy suspicions also reveal a vulnerability for Republicans, who depend mightily on running up big winning margins among rural voters in a state where the more populous urban and suburban regions have been trending Democratic in most recent elections. If a Republican doesn’t win by a lot in rural Virginia, there are few other paths to victory.

“Whether I vote for an independent person or I vote for Terry McAuliffe, I know one thing: I am not voting for Ken Cuccinelli, because I can’t trust him,” [Aimee] Compton [of Lebannon] said.

That kind of sentiment has become surprisingly common this election year in a region that has stayed stubbornly red even as the rest of Virginia has tinged purple.

In a Washington Post/Abt-SRBI poll conducted in mid-September, the Republican took 33 percent of registered voters in southwest Virginia, while McAuliffe drew 31 percent.

“I don’t think the man ought to get elected by somebody that’s paying him. To me, that’s not good politics,” said Eddie Fletcher, a disabled former construction and coal worker from Rowe who is particularly bothered by Consol’s donations to Cuccinelli.

I hope the voters of Southwest Virginia continue to see Cuccinelli for what I see him to be: a corrupt, lying extremist who would be bad for Virginia if elected.
Posted by Michael-in-Norfolk at Wednesday, October 23, 2013