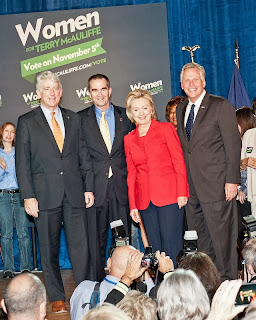 Perhaps hoping to energize women voters and increase the focus on the extremism of Ken Cuccinelli and the rest of the GOP Christian Taliban ticket, Hillary Clinton appeared at a Terry McAuliffe event in Northern Virginia yesterday.  The dishonesty of the GOP ticket is dumbfounding as they try to claim that ads targeting their past statements and legislative actions are "lies."  No one lies more, it seems that those who wrap themselves in Christianity and religiosity like Cuccinelli, "Bishop" Jackson, and Mark Obenshain.  Obenshain has even gone so far that his history is one of "protecting women" even though he sought to criminalize women who had miscarriages if they failed to report their miscarriage to police within 24 hours.  One can only hope that Clinton's efforts make it clear to gays, women and minorities that they need to turn out in force and delivery a Democrat sweep on November 5, 2013.  Politico has details on Hillary's campaign appearance.  Here are details:

FALLS CHURCH, Va. – Hillary Clinton made her first campaign appearance in nearly five years on Saturday to support Terry McAuliffe, her old friend who’s running as the Democratic nominee for governor in Virginia.

She laid out a case for him that rested strongly on women’s equality, gay marriage and rejecting the “scorched earth” politics that have defined Washington over the past several months. Though she didn’t directly call out Republicans, it was clear who she was talking about when she said some politicians have been operating in an “evidence-free zone”, “do not believe in America’s progress” and are trying to “hijack” the future.


“There are times when none of us can sit on the sidelines,” Clinton told the crowd of more than 700 people. “And right now, here in Virginia, is one of those times. … The whole country is watching this election. Watching to see whether the voters of Virginia lead the way of turning from divisive politics [and] getting back to common sense and common ground.”

The speech effectively ended Clinton’s hiatus from electoral politics. But Clinton, whose allies are mindful of her being in the spotlight too early, kept it devoid of heavily-partisan barbs and language, allowing her to maintain some distance.

She went on to cite the human toll of the shutdown: families who suffered through furloughs, businesess that lost revenue, mothers who struggled to provide formula for babies.

“That is not the kind of leadership we need in Virginia and America today,” she said. “Openness and tolerance are essential … building blocks for a creative, dynamic and diverse economy.”

Clinton never mentioned Republicans specifically, and struck, to the extent possible, a theme of bipartisanship. She also never specifically talked about gay marriage, saying the need to protect people’s rights to love whomever they want is paramount. While she never made reference to her own potential ambitions, it was clearly on the minds of everyone there.

People are waiting to see, she said, “if the rights of women and girls will be respected, especially over our own bodies and health care.”

“I’ve been in a lot of elections,” Clinton said with a light toss of her head and a smile, toward the end of her speech. The crowd ate it up.  “I know at the end of the day it all comes down to who takes the trouble to show up and vote,” she said.

Turn out is going to be critical - especially if we are to achieve the much needed rebuke of the entire Christofascist/Tea Party GOP ticket.  A clear message needs to be sent that The Family Foundation's agenda of hate, division and religious based bigotry is no longer welcome in Virginia.