Poll: Major Damage Done to the GOP After Government Shutdown 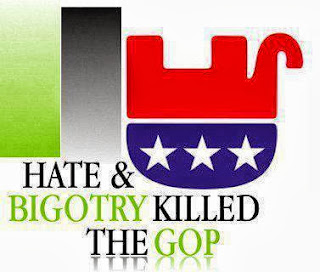 Just as the Christofascist will yet be the death of Christianity as a main stream religion, so too are they - together with their allies in the Tea Party - helping to kill the Republican brand.  In both instances, the extremism and refusal to accept objective reality are driving sane and moderate individuals away.  A new Washington Post-ABC News poll contains very bad news for the Republican Party and confirms that pandering to the lunatics of the Tea Party and far right is not good for the long term viability of the GOP.  The poll finds include: 8 in 10 Americans disapprove of the GOP forced shutdown; 2 in 3 Republicans and GOP leaning moderates disapprove of the GOP handling of the shutdown impasse.  The Washington Post has coverage and here are excerpts:

The budget confrontation that led to a partial government shutdown dealt a major blow to the GOP’s image and has exposed significant divisions between tea party supporters and other Republicans, according to a new Washington Post-ABC News poll.

The survey highlights just how badly the GOP hard-liners and the leaders who went along with them misjudged the public mood. In the aftermath, eight in 10 Americans say they disapprove of the shutdown. Two in three Republicans or independents who lean Republican share a negative view of the impasse. And even a majority of those who support the tea party movement disapprove.

An overwhelming majority of Americans say the budget dispute damaged the U.S. economy and the nation’s image in the world. A sizable majority lacks confidence that another crisis can be averted when the current agreement runs out early next year.

Still, President Obama’s overall ratings have held steady. Almost half of all Americans approve of the way he has handled his job, and an almost identical number disapprove.

The tea party fares just as badly. Barely a quarter of the public has a favorable image of the movement, the lowest rating in Post-ABC polling.

Asked who they consider responsible for the impasse, 53 percent of poll respondents cite Republicans, 29 percent blame Obama and 15 percent fault both sides equally.

The confrontation has had a corrosive effect on attitudes about the direction of the country, the workings of government and the image of elected officials. The percentage of Americans who say the United States is seriously off track rose from 60 percent in July to 68 percent today — the highest in more than a year.

I have no sympathy for GOP moderates and the so-called GOP establishment.  They either sat on their hands or actively encouraged  the rise of the Christofascists/Tea Party in the GOP out of a cynical quest for short term gain.  Now, the Frankenstein monster has been unleashed and as even large GOP donors are learning, it cannot be controlled and it is totally irrational.

Posted by Michael-in-Norfolk at Tuesday, October 22, 2013