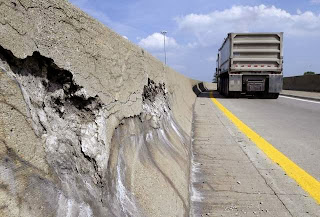 With the toxic Liberty University dominating the city in many ways, Lynchburg, Virginia is considered by some to be a reactionary backwater.  But not everyone in the city is a Kool-Aid drinker as demonstrated by the Lynchburg News Advance's condemnation of Ken Cuccinelli's plan for highway funding which would solve the state's finance problem by simply throwing more of the highway construction/maintenance burden on cities and counties.  Cuccinelli proposes to continue the very mindset that has helped put Virginia in the die straits it now faces with an inadequate transportation system.  Here are excerpts from the editorial:

With one exception — the creation of a Virginia Congestion Matrix Database so the public can track progress on solving the 100 most important transportation bottlenecks, it is more of the same we’ve seen from many Republicans in Richmond during the past decade. And that makes it a bad deal for the commonwealth, localities who would be harmed, the business community and residents.

In the summary of the transportation plan (available online at Cuccinelli.com/transportation), he claims one of the “fundamental reasons” for the commonwealth’s being “plagued” with transportation woes for decades is “undeniable lack of decision making and buy-in at the local level.”
We beg to differ with the candidate.

One of the fundamental reasons for the commonwealth’s transportation woes was the utter inability of the General Assembly, specifically the no-tax wing of the GOP in the House of Delegates, to accept reality and raise revenues for transportation infrastructure problems.

For a quarter of a century, the gas tax, the primary source of state dollars for transportation, sat at 17.5 cents, unindexed to inflation. Its purchasing power was cut in half by inflation, and the GOP did nothing — nothing — to address the looming crisis. It wasn’t until this year that Gov. Bob McDonnell managed to cobble together a plan that only just begins to address Virginia’s glaring needs.

And as attorney general, Cuccinelli did his best to sabotage that plan at the last minute. Now he wants to “devolve” the responsibilities of the state upon localities, all “without imposing a statewide tax increase”?

Pardon us if we don’t buy this line yet again.

The simple reality is that highways are one of the things the state, not localities, needs to build and maintain.  And that means raising taxes - the gasoline tax is a perfect example - so that an inadequate and deteriorating highway system can be updated and maintained properly.   Forcing costs on localities which would then have to increase real estate taxes is not a solution.