How Mark Obenshain and Ken Cuccinelli Have Aided Sexual Predators 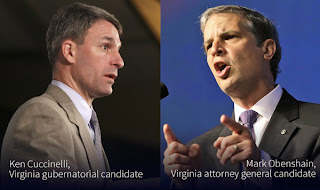 To listen to their campaign ads one would think that Mark Obenshain and Ken Cuccinelli (both pictured above) have made careers out of "protecting" the public against "sexual predators."  Indeed, Cuccinelli claimed that his lunatic effort to reinstate Virginia's twice invalidated "crimes against nature" statute - which outlawed all sex unless between heterosexuals in the missionary position - was aimed at protecting against sexual predators.  As a great piece in Think Progress explains that in reality Cuccinelli and Obenshain's extremism and efforts to demonize and criminalize gays have, in fact, done the opposite of what both men claim because they have actually acted to block changes to Virginia's laws that would have allowed stricter penalties against true sexual predators.  Here are article excerpts:

The full story, however, is far more nuanced, and it significantly undermines Cuccinelli’s effort to paint himself as a crusader for children. The truth is that Cuccinelli himself, along with the Republican candidate now running to replace him as attorney general, both played a significant role in undermining Virginia’s ability to prosecute sexual predators. As state lawmakers, both men put their personal opposition to homosexuality and gay sex above Virginia’s need to combat genuine sex crimes. And both men were part of a much greater effort to keep an unconstitutional law on the books.

Though both have made fighting sexual predators a key campaign issue, the Republicans nominees in next month’s Virginia Gubernatorial and Attorney General elections — Cuccinelli and Mark Obenshain (R), respectively — are among those who bear responsibility for allowing this [the reversal of William Scott MacDonald's conviction under the sodomy statute] to happen, having toed the line of the state’s most prominent Christian Right organization.

The leading opponent of such changes was a Richmond-based anti-LGBT group called the Family Foundation of Virginia. The group’s legislative scorecards rewarded legislators who opposed such changes and punished their backers. Their website in 2001 identified keeping the sodomy ban unchanged as a “priority.”

The U.S. Supreme Court’s 6 to 3 Lawrence v. Texas ruling, authored by Justice Anthony Kennedy in 2003, held that adult couples are “entitled to respect for their private lives,” and that states “cannot demean their existence or control their destiny by making their private sexual conduct a crime,”  . . . .
As a result, sodomy laws like Virginia’s were deemed unconstitutional.

The Republican-dominated panel recommended that the unconstitutional Crimes Against Nature law (§ 18.2-361) be left on the books but that a new section (§ 18.2-361.1) be added to specifically criminalize “sodomy that occurs in a public place.”

Senator Patsy Ticer (D) proposed a simpler approach. Her bill, also filed in January 2004, sought to add an amendment to the old law to make it clear that it “shall not apply where all persons are consenting adults who are not in a public place and who are not aiding, abetting, procuring, engaging in or performing any act in furtherance of prostitution.” The Ticer bill was endorsed by the committee on a bipartisan 9 to 6 vote. Voting yes were committee chairman Ken Stolle and two other Republican Senators. Voting no were then-Sens. Ken Cuccinelli and Mark Obenshain. Both received 100 percent ratings from the Family Foundation of Virginia for their voting in that session — and both would later receive the group’s “Legislator of the Year” award.

Ticer, now retired, told ThinkProgress that the Family Foundation’s opposition was a major factor in blocking her bill, “They had a lot of influence and have a lot of influence.” Stolle, now Virginia Beach Sheriff, concurred, adding that “a number of members” of the committee “were afraid the Religious Right would see it as weakening their opposition to homosexual activities and that nature.”

After the 4th U.S. Circuit Court of Appeals in Richmond ruled that the law and William Scott MacDonald’s conviction were unconstitutional, under Lawrence, . . . . Ironically, it fell on now-Virginia Attorney General Ken Cuccinelli II to defend the statute he had refused to update nine years earlier. Though he claimed that his unsuccessful effort to appeal the 4th Circuit’s ruling to the U.S. Supreme Court was not about banning oral sex or criminalizing same-sex couples, in 2009 he told a newspaper that he supported restrictions on the sexual behavior of consenting adults: “My view is that homosexual acts, not homosexuality, but homosexual acts are wrong. They’re intrinsically wrong. And I think in a natural law based country it’s appropriate to have policies that reflect that. … They don’t comport with natural law.”

Senator Janet Howell (D), who supported updating the law in 2004 as a Crime Commission member and as a member of the Senate Courts of Justice committee, told ThinkProgress that Cuccinelli and Obenshain’s intransigence undermined their efforts to protect children. “They’re kind of hoisted on their own petard,” she observed.

Senator Adam Ebbin (D), the lone no vote in 2004 in the House of Delegates on Albo’s plan to leave the Crimes Against Nature provisions untouched, agreed. “If Ken Cuccinelli and Mark Obenshain hadn’t been stuck in past centuries, we wouldn’t be in the situation we’re in,” he told ThinkProgress.

Stolle, who in his new role as a law enforcement officer must enforce the laws, added, “hindsight’s always 20/20, but we should have updated it.” “The inaction of the General Assembly,” he lamented, “caused this [statutory rapist] to go free.”

Obenshain and Cuccinelli have always exhibited blind obedience to the anti-gay extremists at The Family Foundation and, in fact, owe their nominations to that foul organization.  It is no surprise that they placed fealty to dictates from The Family Foundation ahead of a ruling by the U.S. Supreme Court and protecting the public from true sexual predators.