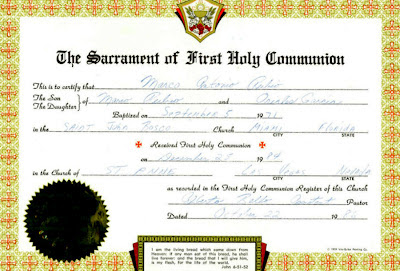 In yet another sign that the Republican Party is becoming a Christianist sectarian party not the least bit tethered to objective reality, Florida Senator Marco Rubio apparently felt compelled to release a copy of his Roman Catholic First Communion Certificate to counter claims in an unauthorized biography that he was actually a Mormon and, therefore, not really a Christian and by default, not worthy of support by the Bible beater crowd.  It's lunacy, but welcome to today's GOP.  Here are excerpts from BuzzFeed:

Senator Marco Rubio's staff is disputing a section of a new biography that suggests that Rubio, as a boy, was a Mormon until the family returned to Miami.

“The author incorrectly claims that Senator Rubio returned to the Catholic Church after the family moved to Miami and suggests the ‘exact date of their return is in dispute’," spokesman Alex Conant said in an email of the new book, Manuel Roig Franza's "The Rise of Marco Rubio." "In fact, Marco entered preparation courses for communion in 1983 and it is a documentable fact that he received his first communion in Las Vegas on Christmas Day 1984 before the family returned to Miami the next year.”