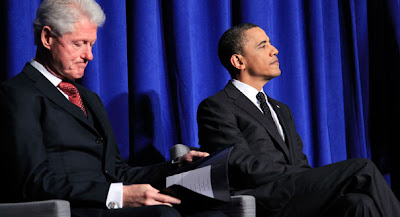 Love him or hate him, most people will concede that Bill Clinton was/is one slick and savvy politician.  Now, according to a story in Politico, Clinton is working with Barack Obama to fine tune the line of attack on Mitt Romney for the general election.  The plan?  To use Romney's own words against him, including in particular his claim that he's a "severe conservative," with a goal of driving  Hispanics, women and moderate independents away from Romney and making it difficult for Romney to "Etch A Sketch" a tilt toward the middle.  Throughout the GOP primary clown car circus, I could not help but believe that Romney was leaving lots of campaign material for Obama's future use.   I'm glad that Romney's disgusting pandering to extremists may yet severely bit him in the ass.  Here are highlights from Politico:

Barack Obama’s top advisers are making a mid-“core” correction in their attacks on Mitt Romney — with a little nudge from Bill Clinton, who is finding a niche as an Obama campaign whisperer and fundraiser.

Late last year, as Romney galloped to the right, Obama’s messaging team hit on what it assumed would be a durable bumper-sticker attack: Romney, senior advisers David Plouffe and David Axelrod intoned time and again, was a political shape-shifter who lacked any real moral or political “core.”

But Clinton, echoing survey data presented by Obama’s own pollster Joel Benenson, quietly argued that the empty-core approach failed to capitalize on what they see as Romney’s greatest vulnerability: An embrace of a brand of tea party conservatism that turns off Hispanics, women and moderate independents.

A more effective strategy, Clinton has told anyone who would listen, would be to focus almost exclusively on Romney’s description of himself as a “severe conservative,” to deny him any chance to tack back to the center,

Clinton’s advice, buttressed by Benenson’s polling, has clearly gained traction internally since the end of Romney’s four-month primary ordeal. “The decision here is that if you are going to pin a tail on the donkey,” says a top Democratic strategist who supported the Clinton view, “let’s make it the conservative tail.”