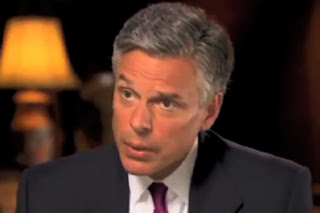 Former GOP presidential nominee candidate Jon Huntsman has made some statements which, while true in my opinion, are surely going to set the extremists within the GOP off in a major way.  Perhaps my favorite statement was when Huntsman said of the GOP's ideological rigidity "this is what they do China on party matters if you talk off script" and then went on to say "I don’t know what world these people are living in"  in the context of GOP foreign policy views.  Huntsman's comments are timely since increasingly the GOP base seems to live in some sort of alternate universe where facts and objective reality simply do not matter.  Hence the party's effort to re-implement the horrifically failed policies of the Bush/Cheney regime that set the stage for the current economic malaise that continues to grip the country.  A column in Huffington Post and a piece in The Daily Beast look at Huntsman's remarks.  First, these highlights from The Daily Beast:

Why is Jon Huntsman going rogue? Having utterly flopped in the Republican primaries, the former Utah governor now seems intent on trashing the party.  Here are the possibilities:


--He’s really ticked off at the GOP for failing to see the brilliance of his candidacy.
--He feels he damaged his reputation with his short-lived presidential run and is doing some repair work.

--He’s bored and wants some attention.

Huntsman kicked off his rehabilitation tour Sunday night at New York’s 92nd Street Y, saying he regretted raising his hand at one debate to oppose an imaginary budget containing $10 in cuts for every $1 in tax increases. “What went through my head is if I veer at all from my pledge not to raise any taxes…then I’m going to have a lot of explaining to do,” he said. Translation: Nuance doesn’t sell well in a sound-bite-driven campaign. Huntsman wishes he had a do-over.

The former ambassador to Beijing also told the crowd he was disappointed that the GOP disinvited him from a Florida fundraiser after he called for a third party. His thumb-in-the-eye line was: “This is what they do in China on party matters if you talk off script.”

[H]ere’s the Buzzfeed lead: “Former Republican candidate Jon Huntsman took a battle axe to his own party, comparing it to China's Communist Party…” Seems on target to me.  .   .   .   .  The former governor may have a bright future, but it’s probably not as a Republican presidential candidate.

He also criticized the Republican candidates' foreign policy stances, particularly in regard to China. "I don’t know what world these people are living in," Huntsman said.

He also joked that his wife forbade him to pander to the party's far-right contingent ahead of Iowa's caucuses, which likely hurt him with conservative voters in the Hawkeye State.  “She said if you pandered, if you sign any of those damn pledges, I’ll leave you,” Huntsman said. "So I had to say I believe in science -- and people on stage look at you quizzically as though you're ... an oddball."

"Gone are the days when the Republican Party used to put forward big, bold, visionary stuff," Huntsman said during the February interview with MSNBC that got him disinvited from the RNC fundraiser. "I think we're going to have problems politically until we get some sort of third-party movement or some alternative voice out there that can put forward new ideas."