Can Romney Win Over Christianist Voters? 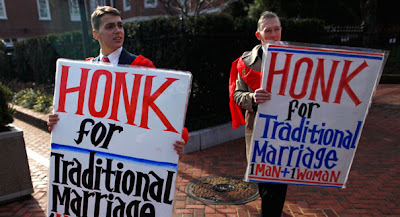 As Marcus Rubio's almost frantic release of a copy of his First Communion Certificate indicates, the Christianist extremists who make up a large segment of the GOP party base are none too thrilled with Mormons candidates.  As a result, the question faced by Mitt Romney is whether or not these voters will put aside their views that Mormons are members on a non-Christian cult and vote for Romney because their hatred for Obama is even greater than their dislike of Mormons.   If the answer is "no", then these theocrats may stay home and not vote in November.  Unfortunately for Romney, in most states there will not be inflammatory social issues on the ballot to galvanize the Mormon haters to go to the polls nonetheless.  A piece in Politico looks at how the lack of divisive ballot initiatives may hurt Romney.  Here are some highlights:

Mitt Romney isn’t the first Republican to worry about evangelical turnout — and unlike George W. Bush he can’t rely on a red-meat ballot initiative to get them to the polls.

Romney is about to head into the general election still grappling with how to connect with conservative Christians who could be crucial in states like Ohio, where Bush won with about 118,000 votes thanks in part to an anti-gay marriage ballot initiative that revved up the base.

But this year in Ohio, Florida and Missouri, there are no anti-gay marriage proposals on the ballot and only a few others that could come close — like some targeting President Barack Obama’s health care law and another on religious freedom.

That means that Romney, a Mormon, is going to have to step up his sales pitch and make the case to evangelicals that they should make it to the polls for him — since there’s no backup reason.
Family Research Council’s Ken Blackwell, who helped deliver Bush’s victory in Ohio, said Romney will need to do more than make the case against Obama to win over religious conservatives.

[S]o far only a few opportunities for the Romney campaign to rely on ballot initiatives to help boost turnout in states like Florida and Missouri.

So far, Romney is no Bush-devotee when it comes to religion on the campaign trail.   The Massachusetts Republican has avoided discussing his Mormon faith on the campaign trail, keeping religious conservatives at arm’s length as he moved to secure the GOP nomination.  Until recently, he’s struggled to find support among evangelical leaders who were more comfortable with GOP presidential candidates like former Sen. Rick Santorum (R-Pa.). And he won’t have the benefit of pro-traditional marriage amendments in several states as Bush did to help him turn out the vote.

Despite the growing movement of high-profile conservative Christians backing Romney, he still needs to win over the parishioners in the pews.  .   .   .  The growing number of high-profile endorsements hasn’t yet translated to a surge in individual church-goer backing, according to the American Family Association’s Bryan Fischer.   “The reality is that Governor Romney is going to experience a severe enthusiasm gap with evangelicals,” Fischer said. “Barring something exceptional, a Republican candidate cannot win without the enthusiastic support of evangelicals.”

Romney’s camp may be assisted by the dire economy. A recent Pew Research Center survey found that social issues ranked as the lowest priority of 2,400 registered voters. Stuart Roy, who helped run the pro-Santorum super PAC Red, White and Blue, said that focus groups they held with religious conservatives found that while they felt strongly about their positions, they were much more adamant about beating Obama in November.

The real test for Romney and evangelicals may be whether he can find a way to connect with them and bring some of them over on the margins, particularly among black evangelicals who may have voted for Obama in 2008 but have become disaffected with his presidency.

Religious affiliation should not factor into one's fitness for public office - at least not among rational individuals.  The Christianist element of the GOP base, however, almost by definition is NOT rational.  Hence, Mitt "Etch A Sketch" Romney's difficulty is connecting with the GOP base.
Posted by Michael-in-Norfolk at Thursday, April 26, 2012

It's a valid question Michael.

My neighbor and I were talking over the back yard fence this week.

He told me he is not going to vote this year. Sitting it out. Hates both candidates. I told him that sitting it out is the same as voting for Obama.

People like my neighbor do not remember that Hitler was elected in Germany because so many people did not vote at all.

I am not one who thinks Obama can compare with Hitler, but the principle is the same. I don't think a man should be elected to the most important job in the world by a minority of eligible voters.