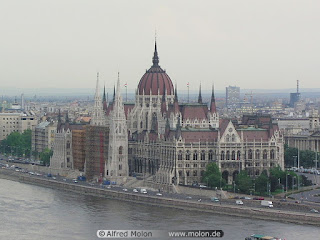 My father's parents were citizens of the Austro-Hungarian Empire before they left for America just prior to World War I and I have often wanted to visit the region.  Now, signs in Hungry suggest I might want to delete that country from any such trip.  With the economy lagging, once again gays - and Jews - are becoming the whipping boys and scapegoats for the political far right.  I certainly have no desire to visit any place that I'm viewed as vermin or my rights are restricted.  I can experience that right here in Virginia.  An op-ed in the New York Times looks at the disturbing signs taking place in Hungry.  Here are some excerpts:

How do you know if a real storm is brewing — or if you’re just reacting to a few passing clouds?  That’s a question that many Hungarians and people keeping an eye on the country are asking these days.

[T]to Kollanyi’s ears and those of many other Hungarians, there’s an authoritarian, nationalistic tenor to things, along with strains of anti-Semitism and antipathy to other minorities.  “It’s not good,” said Kollanyi, who is Jewish, when I spoke with her last weekend. “It’s not even a little good.” Pay attention to Hungary. It may not have any great economic heft, and it’s home to only about 10 million people with a tropism toward beer and a talent for brooding. But it could turn out to be a test case of the E.U.’s imperiled sway in these days of debt and austerity.
Hungary could also be a window into just how potently economic anxiety fans the flames of bigotry. E.U. membership hasn’t brought Hungarians the broad prosperity they had hoped for; the country has had severe budgetary woes of late. And the far-right party I mentioned, Jobbik, has converted these disappointments into questions about the country’s orientation to the West and, for good measure, about its supposed coddling of Jews, gays and Roma: Hungary’s trusty trinity of scapegoats.   This month Jobbik introduced a bill that refers to homosexuality as a perversion and bans its promotion in language so vague, opponents say, that two men or two women holding hands in public could theoretically be imprisoned.

[T]he Jobbik magazine, a recent issue of which had an article extolling the party’s effort to stop Budapest’s gay pride parade, the kind of degenerate event that’s too blithely tolerated in other E.U. countries, the article maintained.  “Deviant West, Normal East,” was the headline. The cover story mentioned historical accounts of Jews using Christian blood in rites. “Whether this is true or not,” the story said, is unknown.

The situation about gay rights in Hungary is really unfavorable as I summerized some data in my blog recently ( http://kaleidoscope.blog.hu/2012/04/07/homophobia_is_spreading_like_the_plague ). Anyway I think you shouldn't give up your plan to visit to Hungary once, becuase we won't let the stupid homophobic people to make the member of LGBT community stressed. The majority of Hungarians accept the fundamental human rights, and Jobbik will be depressed in the next elections - I hope.