Quote of the Day: Andrew Sullivan on the Pope v. Obama 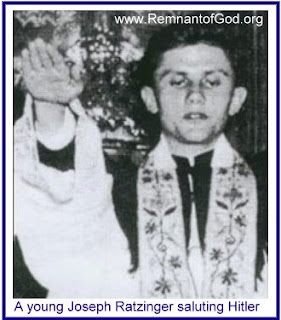 Andrew Sullivan - who unlike myself still somehow manages to view himself as a Catholic - looks at the Catholic hierarchy's decision to challenge Barack Obama over contraception and the hideously disingenuous rallying cry of "religious liberty" even as the hierarchy endeavors to trample on the religious liberty of everyone else.   Personally, I view the hierarchy's pretended concern about religious liberty as being about as sincere as its feigned apologies for the sex abuse scandal.  Stated another way, if you believe ANYTHING that the Church hierarchy has to say, then I have ocean front property in Arizona I want to sell to you.  Here is Andrew's comment:

They barely protested when the last president authorized torture, but the Catholic hierarchy is now determined to use what's left of its authority to organize protests this summer against their right to deny insured contraception to Catholic and non-Catholic employees in schools and hospitals.  This will be their cause - not saving universal healthcare from repeal, not bringing illegal immigrants out of the shadows, not protecting the poor, but affirming that religious liberty is at stake if they cannot keep the pill from their female employees' insurance, 98 percent of whom use it at some point in their lives anyway.

It's a risky strategy. I know few Catholics in the pews who share these absurd priorities, and for the hierarchy to become so closely identified with the Christianists among the evangelical right could split the church more profoundly. And that, I suspect, is partly the intent. If your goal is to purify the Church, to deter all the faithful that do not share the reactionary priorities now increasingly preached from the pulpit, then this will help. A smaller, purer Catholic church, reduced to the Santora and the Donohues, is what these dim-witted Vatican apparatchiks have been told to encourage. I cannot believe it will help the faith.

Protecting child rapists, beating up on nuns who practice the Gospel message because they are not sufficiently homophobic, and withdrawing funding from groups that help the poor and homeless because they don't oppose gay marriage are now the primary hallmarks of the Church hierarchy.  It's disgusting and one can only hope that the Catholic Church dies a quick death outside of ignorant and backward pockets in Africa and parts of the Third World.  What is most amazing is that the Church is being killed from within the ranks of the hierarchy.
Posted by Michael-in-Norfolk at Tuesday, April 24, 2012