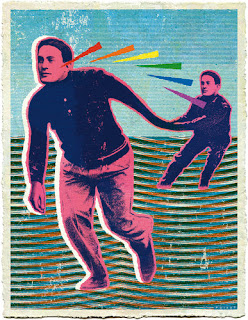 I've noted several times the new study that concluded that many of the most vocal homophobes are actually struggling against their own conscious or unconscious attraction to members of the same sex.  Much of the struggle derives from religious brainwashing and rigid, anti-gay family upbringings which make the idea of one being gay simply too horrible to contemplate.  To me, the study findings underscore the psychologically damaged and emotionally disturbed nature of most homophobes.  Now, one of the authors of the study, Richard M. Ryan, a professor of psychology, psychiatry and education at the University of Rochester, has an op-ed in the New York Times that further elaborates on the findings of the study which seems to describe individuals like Tony Perkins, Peter LaBarbera, Greg Quinlain, Robert Knight and a host of other professional Christians/"ex-gay" proponents to the last detail.  Here are some highlights:

WHY are political and religious figures who campaign against gay rights so often implicated in sexual encounters with same-sex partners?

One theory is that homosexual urges, when repressed out of shame or fear, can be expressed as homophobia. Freud famously called this process a “reaction formation” — the angry battle against the outward symbol of feelings that are inwardly being stifled. Even Mr. Haggard seemed to endorse this idea when, apologizing after his scandal for his anti-gay rhetoric, he said, “I think I was partially so vehement because of my own war.”

It’s a compelling theory — and now there is scientific reason to believe it. In this month’s issue of the Journal of Personality and Social Psychology, we and our fellow researchers provide empirical evidence that homophobia can result, at least in part, from the suppression of same-sex desire.

Our paper describes six studies conducted in the United States and Germany involving 784 university students. Participants rated their sexual orientation on a 10-point scale, ranging from gay to straight. Then they took a computer-administered test designed to measure their implicit sexual orientation.
Using this methodology we identified a subgroup of participants who, despite self-identifying as highly straight, indicated some level of same-sex attraction (that is, they associated “me” with gay-related words and pictures faster than they associated “me” with straight-related words and pictures). Over 20 percent of self-described highly straight individuals showed this discrepancy.

Notably, these “discrepant” individuals were also significantly more likely than other participants to favor anti-gay policies; to be willing to assign significantly harsher punishments to perpetrators of petty crimes if they were presumed to be homosexual; and to express greater implicit hostility toward gay subjects (also measured with the help of subliminal priming). Thus our research suggests that some who oppose homosexuality do tacitly harbor same-sex attraction.

What leads to this repression? We found that participants who reported having supportive and accepting parents were more in touch with their implicit sexual orientation and less susceptible to homophobia. Individuals whose sexual identity was at odds with their implicit sexual attraction were much more frequently raised by parents perceived to be controlling, less accepting and more prejudiced against homosexuals.

Not all those who campaign against gay men and lesbians secretly feel same-sex attractions. But at least some who oppose homosexuality are likely to be individuals struggling against parts of themselves, having themselves been victims of oppression and lack of acceptance. The costs are great, not only for the targets of anti-gay efforts but also often for the perpetrators.