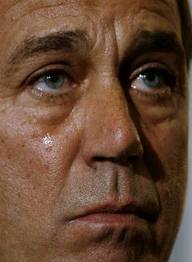 While John Boehner likes to shed tears at a drop of pin and wrap himself in Catholic religiosity, sadly the truth of the matter is that he's a lying douche bag - or at least that's my opinion of the man.  In remarks today on Fox News, a/k/a Faux News, Boehner claimed the American economy may “never recover” if Barack Obama is re-elected.  Never mind that the policies that first tanked the U. S. economy were those of Chimperator Bush which were rubber stamped by the then GOP controlled Congress.  Never mind that Boehner and the GOP extremists in the House of Representatives have block countless Obama/Democrat initiatives that might have improved the economy for the simple partisan purpose of harming Obama.  And never mind that the type of austerity that Boehner and his fellow extremists have championed is exactly what is taking down a number of European economies.  Boehner apparently believes that all American voters are all cretins and morons like those who comprise the GOP base.  Boehner may want to return to the abuses and excesses of the wealthy during the Gilded Age, but I suspect most of us do not. Fortunately, a spokesman for Nancy Pelosi called Boehner out. Politico looks at Boehner's untrue and utterly disingenuous remarks.  Here are excerpts:

House Speaker John Boehner said in a stark warning Tuesday that if President Barack Obama wins reelection, the American economy may “never recover.”  “The president’s economic policies have failed – I would argue they actually made things worse. And as a result, the president has turned to the politics of envy and division. This is not in my opinion the right way to run for reelection,” Boehner said on Fox News. “America can’t live for four more years with Barack Obama as president. His policies will turn America in a direction that we may never recover from.”


Boehner said in the TV interview that with Obama in the White House for four more years, the country will be sent “down a path that will look a lot like what we see in Europe: a big social welfare state, high unemployment, slow economic growth and a government that is overly large.”

Nadeam Elshami, a spokesman for House Minority Leader Nancy Pelosi, called on the House speaker to “stop casting blame” “After walking away from the ‘grand bargain,’ it’s time for Speaker Boehner to look in the mirror, stop casting blame, and start working with Democrats on bipartisan solutions,” Elshami said in an e-mail.   During his sit-down with Fox, Boehner also predicted Republicans had a “one in three” chance of losing their majority in the House,. . . .