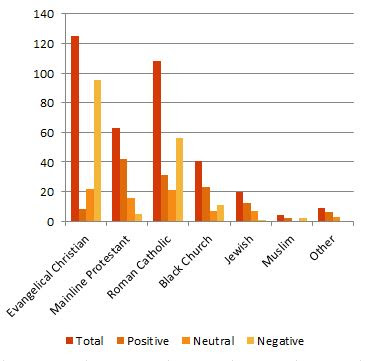 I often complain about the laziness of much of the mainstream media and its willingness to give a platform to the leaders of registered hate groups such as FRC's Tony Perkins who besides being vitriolically anti-gay has white supremacist associations that somehow never get mentioned by anchors and commentators who typically allow Perkins and those of his ilk to spew anti-LGBT lies unchallenged.  A new study from GLAAD and the University of Missoui Center on Religion & the Professions confirms that I'm not imagining the bias and confirms the slanted coverage of religious views on LGBT individuals and our legal rights.  Pro-LGBT religious views are almost completely absent from news coverage while the anti-LGBT coverage is far over represented in comparison to the percentages various denominations bear to the total population.  Here are highlights from Think Progress on the mainstream media's flawed coverage:

A new study from GLAAD and the University of Missoui Center on Religion & the Professions finds that pro-LGBT people of faith are the “Missing Voices” — severely underrepresented in mainstream media. In fact, three out of four religious messages about LGBT issues over the past three years have come from people who identify with anti-gay faith traditions. Evangelical Christians and Roman Catholics were by far the most represented in the media, with mostly negative messages to share.  .   .

The study also notes that the proportion of these messages does not reflect the U.S. population. Evangelicals appear more often (34 percent) than their presence in the population should warrant .  .  .  .  and the frequency of anti-LGBT Catholic messages (over 50 percent) conflicts with the strong LGBT support among American Catholics (over 71 percent).

Perhaps the most troubling result of the study was the discovery that the media constructs a conflict between religion and the LGBT community. Those hostile to LGBT people were often identified with their religious identity, while those who were supportive or neutral were not.  ThinkProgress similarly documented that progressive voices of faith were completely absent from the Sunday morning political shows’ conversations about religion.