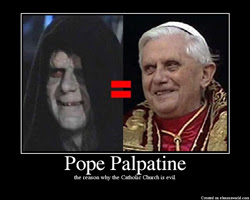 While Benedict XVI, sometimes referred to as the Nazi Pope on this blog, cracks down on American nuns for not being anti-gay and anti-contraception enough, the world wide sex abuse scandal continues with daily coverage out of Australia, Ireland, and of course, the USA, especially the Archdiocese of Philadelphia of late.  With incontrovertibly evidence that bishops, cardinals, Popes - and a Trustee of Boston College - appear to have knowingly protected sexual predatory priests who likely worldwide sexually abused hundreds of thousands of children and youths, the misdirected ire of the Nazi Pope is noting short of ridiculous, not to mention the height of hypocrisy and moral bankruptcy.  A column in the Boston Globe looks at this latest display of moral bankruptcy.  Here are highlights:

Pope Benedict XVI can’t wait to crack down on “radical feminist” nuns.  But will he ever really crack down on protectors of pedophile priests?


A Vatican-led investigation of the Leadership Conference of Women Religious cites the nuns’ silence on abortion and same-sex marriage. How bad is that up against the silence of church officials, from parish priests to the Vatican, who ignored and concealed child sex crimes?


By ironic coincidence, news about the Vatican’s effort to rein in the conference — the largest and most influential group of Catholic nuns in the United States — broke the same day the Rev. Bradley M. Schaeffer resigned from the Boston College Board of Trustees after growing public criticism over the role he played in supervising a former Jesuit priest who allegedly molested dozens of children over a span of 40 years.


The juxtaposition of the two events exposes a familiar church mindset.  Perceived threats to his authority swiftly grab the pope’s attention. Accountability for long-ago threats to children is still something to dodge.


This follows Benedict’s recent condemnation of dissident priests. During a Holy Thursday Mass, the pope publicly rebuked a group of Austrian priests who challenged the church on priestly celibacy and the ban on female priests; disobedience would not be tolerated, he said.  What he [Benedict] does tolerate is a worldwide network of priests who enabled sexual abusers.  Unlike dissidents, they are not called out in St. Peter’s Square and no one is put in charge of reeling them in. They are free, like Schaeffer, to end up on the boards of prominent Jesuit institutions — until public pressure forces them out.


As reported by the Globe’s Michael Rezendes, Schaeffer was the leader of the Jesuits in the Chicago area when an anguished father came to him in 1993 with concerns about an inappropriate relationship between Donald J. McGuire, then a Jesuit retreat leader, and the man’s young son. Schaeffer neither investigated the complaint nor contacted police. Instead, he sent McGuire for treatment of a sexual disorder. Afterwards, he acknowledged he knew the treatment did not cure McGuire.  Today, McGuire is serving 25 years in federal prison on child sex-abuse charges, while the Jesuits face a lawsuit for their failure to protect one of McGuire’s alleged victims.
Schaeffer stepped down after the Boston College independent school newspaper, The Heights, called for his resignation and a group of faculty members met with Boston College President William P. Leahy to make a similar argument.  He continues to serve in the study center and is still a board member at Georgetown University, Loyola University Chicago, and Brebeuf Jesuit, a prep school in Indianapolis.


Benedict has apologized for the clergy sexual-abuse scandal and launched ongoing investigations of widespread allegations. But he does not jettison all those who broke the church’s sacred covenant with children. There are too many and the chain of accountability leads directly to him. It’s much easier to condemn naughty nuns.


Benedict's moral bankruptcy and hypocrisy make a tawdry whore look virtuous.  Why does anyone listen to anything this monster says?
Posted by Michael-in-Norfolk at Sunday, April 22, 2012