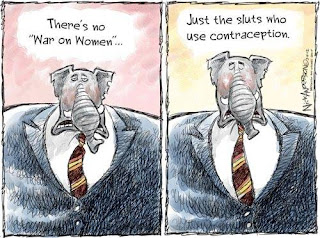 Republicans protest that they are not conducting a war on women.  Yet actions speak louder than words and a review of what is happening in GOP controlled states such as Virginia underscores that if women per se are not the targets, their rights and control of their own bodies are very much in the cross hairs of the GOP.  Much of this anti-women's rights agenda is driven by the Christianist base of the GOP which seems most happy when women are barefoot and pregnant, and preferably in the kitchen and in the home.  Never mind that modern day economics make it impossible for most women to remain at home even if that were their preferred choice.  Andrew Sullivan looks at what is happening in GOP controlled states and it's hard not to describe what's happening as anything less than an assault of women's rights:  Here are excerpts:

I hate the term "war on women". It's so hackish and echoes with the kind of liberal screechiness that backfires with everyone else. But the fact that there is a wave of laws in GOP controlled states, making abortion harder and harder and more humiliating to obtain, and what can reasonably be described as a full-bore assault on Planned Parenthood, is simply undeniable. And women surely take this personally - hence the extraordinary gender gap this time around. But the Christianist GOP is undeterred. While Oklahoma House Republicans temporarily shelve a personhood bill (similar to the initiative defeated by Mississippi voters in November), the Tennessee House and Senate have moved to authorize prosecution for harming an embryo:

The Senate approved and sent to Gov. Bill Haslam on Monday legislation that allows criminal prosecution for causing the death of "a human embryo or fetus at any stage of gestation in utero." The bill (HB3517) marks the second change in two years to a law that since 1989 had it a crime to cause the death of a "viable fetus." That was changed last year to eliminate the word "viable."

Many in the state are worried about the implications for miscarriage:

Memphis, Tennessee makes Jezebel's "Ten Scariest Places to Have Ladyparts in America" (but Mississippi wins). Meanwhile, Planned Parenthood Wisconsin is suspending non-surgical abortion services because of a new state law which "requires women visit a doctor at least three times before having a drug-induced abortion, forces physicians to determine whether women are being coerced into having an abortion and prohibits women and doctors from using web cams during the procedure":

Here in Virginia the backlash has been so strong that Gov. Bob "Governor Ultrasound" McDonnell has begun running disingenuous ads in an apparent effort to try to rehabilitate his image so that he is more attractive as a VP nominee to Mitt Romney.