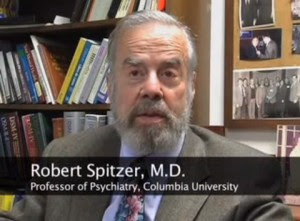 In his much berated 2001 study which used as a study group "ex-gays" from reparative therapy programs concluded that a very small percentage - i.e., 1 or 2 percent - of these "ex-gays" might have been able to actually change their sexual orientation.  The problems with the study were many, especially since it merely relied on the unsubstantiated claims of participants.  The study became a constant marketing piece for fraudulent "ex-gay" programs such as Exodus International and PFOX.  Now, in what can only be viewed as a major blow to the "change myth" proponents, Spitzer has formally renounced the study and has issued an apology to the LGBT  community.  I'm sure that the snake oil merchants in the "ex-gay" community will be livid now that they can no longer cite Spitzer's work as support for their lies.   Similarly, anti-gay politicians have now been deprived of any legitimacy in their claims that being gay is a "choice."  Here are highlights from Spitzer's letter of apology via Truth Wins Out:

Several months ago I told you that because of my revised view of my 2001 study of reparative therapy changing sexual orientation, I was considering writing something that would acknowledge that I now judged the major critiques of the study as largely correct. After discussing my revised view of the study with Gabriel Arana, a reporter for American Prospect, and with Malcolm Ritter, an Associated Press science writer, I decided that I had to make public my current thinking about the study. Here it is.

Basic Research Question. From the beginning it was: “can some version of reparative therapy enable individuals to change their sexual orientation from homosexual to heterosexual?” Realizing that the study design made it impossible to answer this question, I suggested that the study could be viewed as answering the question, “how do individuals undergoing reparative therapy describe changes in sexual orientation?” – a not very interesting question.

I am sure that there will be "ex-gays for pay" who will continue to claim that they have changed their sexual orientation.  The reality, however, will be that they are engaging in self-delusion as I tried to do for 37 years of my life, making myself and others miserable in the process.  The "ex-gay" myth needs to die once and for all.
Posted by Michael-in-Norfolk at Thursday, April 26, 2012